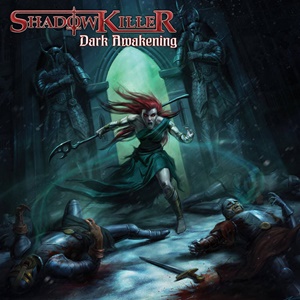 The fourth album from Northern California power/progressive metal force Shadow Killer, Dark Awakening continues to develop the four-piece as far as incorporating a style that is mighty, majestic, heavy, and often epic in all the right places. Beyond the fantasy/mythology lyrical content where we seek adventure amidst the struggles of fires, battles, and treacherous conditions, the music also portrays that commanding powerful feel, the guitars, bass, drums, and keyboard support uniting as one to allow the stories of vocalist/guitarist Joe Liszt to unfold in a Hansi/Blind Guardian-esque way.

Flash and dash in terms of speed or intricacy is not the main goal for this band – they are very comfortable building their arrangements out with a mid-tempo marching template, adding harmony spices from the guitars and vocals to emphasize key hooks or specific passages. Imagine a mix of early Queensrÿche, Savatage, Blind Guardian, and Kamelot with a little less of the cinematic element and that would give you a peak into what you’ll hear for songs like “Jericho Hill” and “Darkness of War”. The rhythm section of bassist Dan Lynch and drummer Gary Neif grab the early attention on “At the River’s Edge”, the instrumental sections semi-circular and rhythmically enticing. The guitar action from Liszt and fellow axe slinger Robert Edwards possesses numerous passionate qualities – always striving to adhere to the mechanics of each individual song and always looking for a key component to drive more melodic moments home. Old organ-strains and supreme progressive drum fills give “Sea of Conquest” a left-field Deep Purple/Uriah Heep vibe at first, but then the song moves to another familiar mid-tempo march as Joe spins a tale of water, warriors, and fields in Valhalla, the instrumental sections getting a bit faster/heavier with some Symphony X/Kamelot-like fiery interplay.

At eight songs and over 50 minutes, Dark Awakening has all the right tools to be a solid power metal outing for most consumers – there will be some though that believe many of the songs lurk in similar tempos and structures, which could lose interest long-term despite the talent present. Not as memorable to these scribe’s ears as the earlier work of 2015’s Until the War Is Won – so approach cautiously and accordingly.