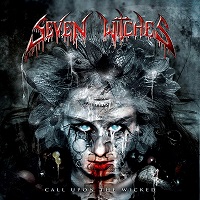 One of the more noted purveyors of traditional metal in North America, guitarist Jack Frost (Blistering has always wondered if that’s his real name) and Seven Witches return with their eighth album, Call Upon the Wicked. A concept album about how women have “been the decline of man since the beginning of time,” Call Upon the Wicked falls quite short of the high standard Frost and company have set. And let’s hope the band’s significant others don’t take umbrage to the album’s concept…some chicks can get really feisty.

With a gristled production job that sounds like Armored Saint circa 1987 (Armored Saint bassist Joey Vera produced this, go figure), Call Upon doesn’t have a lot of teeth to it, preferring to wallow in clichéd and overdone songwriting choices. Vocalist James Rivera (Helstar) still has a ferocious set of pipes on him and he’s not afraid to show ‘em off, just check out opener “Fields of Fire,” but he tends to goes overboard, like on the band’s cover of Cream’s “White Room.” Nevertheless, Rivera does pull out a few memorable moments, specifically on the title track and “Mind Games

Frost has an array of worthy riffs at his disposal, preferring to stay away from the atypical power metal and Maiden-happy harmonic approach that so many fail prey to. Instead, Frost’s jagged and sometimes angular riffs are the only highlight of most of these songs

, especially the “epic” “End of Days” and speedy “Harlot of Troy.” Beyond that, a lot of the album just feels underwhelming, and this doesn’t even take into account the three live songs tacked on at the end which are of considerable low sound quality.

The band’s catalog is peppered with some relatively strong albums, especially 2003’s Passage To the Other Side and ‘05’s Amped, but Call Upon the Wickedmakes it very difficult for one to get excited about Seven Witches again. “Hell hath no fury like a woman’s scorn.” Indeed.