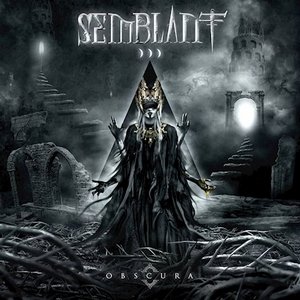 A Brazilian act that has been quietly moving up the ranks since their inception in 2006, Semblant make a return after six years with Obscura. Signing with the larger Frontiers label, the band’s third full-length release contains the same modern gothic flair that helped propel previous release Lunar Manifesto, but is it enough to give them the leverage to move to the upper echelon of the genre?

The short answer to this is no, but that doesn’t mean that Obscura isn’t an enjoyable album either. It has polished all of the usual gothic to pristine levels, and inserted a more heavy metal and melodeath flavor into it. There are some great guitar solos to behold, such as those on “The Hunter, The Hunger (Legacy Of Blood Pt.V),” that ooze melody. A driving force catapults some tracks, like “Left Behind,” with catchy uptempo riffs that have a more triumphant, almost power metal feel – something that works well with the more gothic keys in tow. Slower cuts like “Barely Breathing” or “Daydream Tragedy” feel more traditional with the gothic flair, but help to keep the album more diverse. Of course, the backbone behind the band is the vocals of Sergio Mazul and Mizuho Lin and their interplay. While both give a strong performance, it’s in the way that the vocals are often used, in the more clichéd ‘beauty and the beast’ variety, that keep the band from reaching that next step. With the heavier tracks, it begins to feel like more of the same as you reach towards the end. Not to say that there’s no change to the formula, with Mazul sometimes accompanying Lin with a clean voice, but it would be nice to hear more of this to tweak the formula.

To it’s end, Obscura does deliver everything one would hope to hear within the gothic metal genre. It’s not going to convince anyone outside of that segment to check it out, but Semblant have an ear for what makes it work. It’s only heldback in that with the strong musicianship that is here, there’s potential for the band to really push the envelope and go further into more unique forays instead of playing it safe.