Secrets of the Sky – To Sail Black Waters (Kolony) 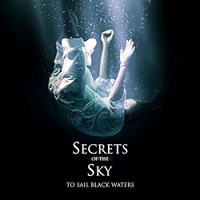 Secrets of the Sky’s debut album, To Sail Black Waters, is steeped in black and sludge metal, but sees the band incorporate myriad influences within their sound to create a tidal wave of audio unique unto itself. Hailing from the mean streets of Oakland, Ca., Secrets of the Sky weaves a tapestry of tragedy within four tracks that span over 43 minutes. The album was recorded at Trident Studios with the talented Juan Urteaga (Testament, Machine Head, Cattle Decapitation) and you can tell the focus was on creating a truly massive yet crisp aural experience.

Rarely does a debut album from an underground metal band sound so good. Generally speaking, most offerings from groups just getting their start come off as murky, but the production value on To Sail Black Waters is some of the best I have heard from anyone this year.

That being said, it was surprising to learn the band is a six-piece, as none of the musicians really stand out from track to track. The real star here – besides Ortega – is singer Garett Gazay, who easily bounces back and forth between blackened shrieks, death growls and progressive yelps – with even some clean, harmonized vocals sprinkled in to boot.

The opening track, “Winter,” kicks off with a heavy riff that gives way to Gazay’s guttural and raspy vocals. Clocking in at just over nine minutes, the song is easily their best offering, taking the listener on several twists and turns, including a nifty hardcore-like breakdown near the track’s halfway point.

From there, the songs all sound great, but they sound all too similar, as well. The pace to each track is deliberate, like a sledgehammer in slow motion pounding away at pavement. There is rarely a change in tempo or overall mood, aside from a random keyboard interlude or passage of whispered vocals. A soaring guitar solo sprinkled here and there could do wonders.

The group certainly shows a lot of promise, and the overall listening experience is enjoyable. However, Secrets of the Sky needs to look into diversifying their sound a bit more in order to become a major player in the ever-changing metal landscape.