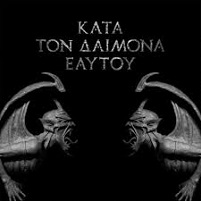 The last Rotting Christ album that was easy to spell was 2002’s Genesis, which speaks to the band’s gravitation to all things exotic…and then some. By doing this, they’re not making it easy on anyone, not like the way they served up Greek black metal silver platters by way of Thy Mighty Contract and the vastly underrated pair of Triarchy of Lost Lovers and A Dead Poem. However, there’s still this air of identity and allure to their new album, Kata Ton Daimona Eaytoy, which translates to “Do What Thou Wilt.” Crowley is in the house, obviously.

Rich with abstract melodies and outside instrumentation, the album finds fast footing with opener “In Yumen – Xibalba.” It lays down a simmering groove, while incorporating sequences and overdubs galore. The band is prone to doing this throughout the album, resulting in some mystical sounding numbers like, “Iwa Voodoo” (nice solo, Sakis), and “P’unchaw kachun – Tuta kachun.” The sounds are decidedly Rotting Christ, meaning, one could tie all sorts of disparate elements (chanting, tribal rhythms, female vocals, etc.), and all it rolls up into a summation of where they’ve been travelling the last three albums. Black metal occasionally sticks its neck out (“Gilgameš”), but it’s tempered with an array with rhythmic exploitations that through the entire song out of its loop. Somehow, RC succeeds in doing this.

Surely there’s a part of a lot of people that want Rotting Christ to track down those vaunted, yet simplistic mid-tempo days. That’s when the band figured out how to write “songs,” while not offending the black metal core. Kata Ton Daimona Eaytoy is a mixed bag, much like everything the band has done after Genesis, but for all the potential turn-offs and head-scratching moves, Rotting Christ is still awfully hard to resist.