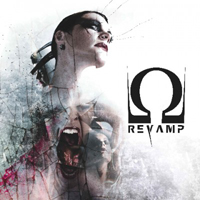 Floor Jansen, often fairly mislabelled as a poor-woman’s Tarja Turunen during her run with After Forever, returns with the appropriately-named ReVamp. Jansen wisely stays close to her symphonic metal roots, churning out an album that has more punch than anything we’ve heard from After Forever, along with the re-requisite (and mildly predictable) synth-metal anglings.

Jansen’s vocals remain a primarily selling point, even if her operatic tone falls short. Instead, it’s her raspy vocals that get the job done, especially in “Head Up High” and “Break,” two clear-cut album highlights. “Millions” operates in a similar space that a lot of her After Forever material did (read: slightly overblown), while “Kill Me With Silence” might be the best jam of the bunch, with Jansen mixing and matching the various tones of her voice for strong effect. We can throw “Fast Forward” into the hat as well, as it employees some fast-paced, scattered vox from Jansen that again, highlight the lower register of her vocals.

Guest appearances also line the album, with George Oosthoek from the long-dormant Orphanage getting his thrills on opener “Here’s My Hell.” Symphony X singer Russell Allen (who hates symphonic metal, by the way) lends his considerable skills to “Sweet Curse,” while Soilwork frontman Bjorn “Speed” Strid” pops up on the very-aggro “In Sickness ‘Till Death to Us Part: Disdain.”

Like most bands of the symphonic metal ilk, ReVamp is tailored-made to suit the female vocalist’s style. As inconsistent as After Forever was (2001’s Decipher is where the band peaked), ReVamp has a chance to rectify that. This self-titled effort is a good start.