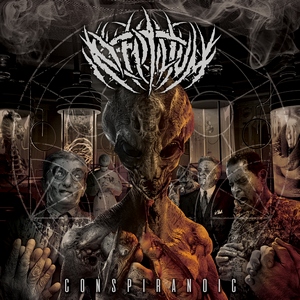 It’s always a plus in 2019 to hear a death metal band that isn’t directly subscribing to one of the two majority factions – that of modern tech death or old school worship. Both are fine in their own rights of course, but the point of death metal is just to give you a good throttling sometimes, no labels attached. Reptilium’s debut EP simply captures that essence.

It’s a bit rooted in brutal death metal, but doesn’t mind going into some darker, black metal influences to add a more genuinely ‘evil’ tone. The overall feel is that of malice. It has that ‘sledgehammer hitting you in the face’ directness that death metal excels at, particularly the massive bottom end to the sound, but lacks the hokeyness that is sometimes present. Snarling, driving riffs, with some occasional atmosphere couple with some brutal chugs and some dips into more dizzying speeds and tremolo riffing. Solid grooves give the listener something to latch onto while driving things forward, and there’s an almost Fear Factory-esque mechanization to them (closer “Just a Machine” stands out here), and allows for some melodies to sneak in without watering down the formula. Vocally, the variety persists, going from the low, menacing growls to some higher blackened shrieks to round it all out.

Conspiranoic is heavy, plain and simple. It doesn’t stick to one defined pathway to accomplish its mission, giving it a more refreshing feel than one might initially expect. A great introductory EP, let’s see where the band takes this sound in the future.