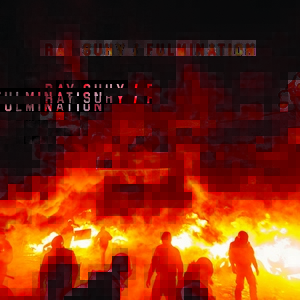 Guitarist Ray Suhy continues to add more notches to his belt, being of East of the Wall, Cannabis Corpse, and Six Feet Under, to divulge a quick resume. His new instrumental solo album, Fulmination, should sound familiar to fans of his previous work, but still entirely fresh and exciting. It’s hard-hitting yet melodic, and never pushes noodling to the point of exhaustion.

Being that this does sit towards the more aggressive and shreddy side of the instrumental divide (as opposed to the more atmospheric approach), Fulmination never becomes too self-indulgent. Meaning the four songs presented here (also a wise choice in an attempt to not overdo it) still feel more like songs than simply technical showcases for Suhy to flash his skills. Sure, there are some fairly spectacular moments sprinkled into the EP (see the fantastic closing “Cess Pool” to start), but the music flows. Never will you stop and think, “I could go for some vocals now,” as there is always something propelling the song forward. One of the best elements is the monstrous guitar tone and sheer weight to the riffing. There’s some super heavy moments, like the beginning of the title track, and the density just draws you in. The melodies can be pretty terrific, to once more reference the title track, and the soloing is technically impressive but still relatable and soars high enough to keep the layperson entertained. Finally, Victor Montanaro’s drumming is worth noting as well – keeping things heavy without relying too often on blasts.

Fulmination is an enjoyable release, even for those who may not always appreciate an instrumental album. Ray Suhy is able to show off what has made him such a valuable asset in the bands listed above as well as diversify a bit further as well.