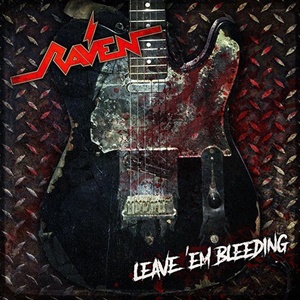 Active times for Raven as touring picks up again – no rest for the wicked as they say, and this power trio of heavy metal isn’t getting any younger with the Gallagher brothers Mark at 62, John at 63 (although current drummer Mike Heller is 40). This latest album Leave ‘Em Bleeding is a compilation of songs pulled from the last seven years of studio/live record material, plus bonus tracks that include other studio songs, special covers, and live songs either recorded on the floor or a special club show.

The first five songs contain highlights from the last two studio albums ExtermiNation and Metal City – “Top of the Mountain” and “The Power” showcasing the band’s versatility, the latter a barnburner featuring speedy riffs plus killer double kick/fill work and a killer half-time groove-oriented chorus. Meanwhile “Destroy All Monsters” contains that creepy instrumental introduction, shifting into a pounding anthem template, the final minute hammering home the ‘exterminate’ concept with Mark’s wild guitar sound effects. “Crash Bang Wallop” from the band’s 2019 live album also makes an appearance. “Necessary Evil” original appeared as a bonus on the Japanese release of Walk Through Fire, dating back to the time when Mark was recovering from his serious injuries relating to being buried under a six-meter wall, while “Malice in Wonderland” is an outtake from the ExtermiNation sessions, another potent headbanger as John’s unique grit, cackle, and spark raises fists while taking all by the throat. The cover songs reflect what these gentlemen cut their teeth on for music/influences – Montrose and Thin Lizzy perfect picks, especially the highly underrated “Bad Reputation” from the latter electric in their capable whirlwind, tasteful hands. The record ends with “Stay Hard” live, recorded in 2017 at a club gig in Oklahoma that an employee of the club supplied to the band – rarely delivered on stage these days, yet still catchy and memorable as always.

Leave ‘Em Bleeding comes hot on the heels of the band touring North America to celebrate the 40th anniversary of Wiped Out – making this probably a record to keep the lads churning along steady as ever for the faithful. Crank it loud.