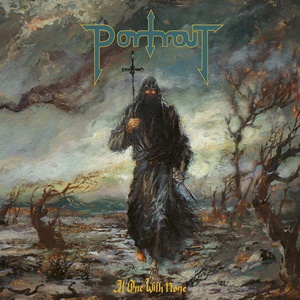 Development in a long career of metal bands usually takes a specific track. Showcasing energy and influences early on through the first couple of albums, only to shed a collective skin to subscribe to your own internal vision of what you want to achieve in your own style. Portrait as a traditional heavy metal act since 2005 have taken old school bands as a compass, slowly morphing their abilities into a sound and way of songwriting that has a bit of diversity, atmosphere, and darker charm. At One with None as the quartet’s fifth album peaks more into the epic nature of their sound – infusing accents from 70’s progressive rock, extreme metal, and other facets without veering too far off the expected Portrait path.

The layers of rhythms and harmony accents from guitarist Christian Lindell set up wonderful sequences for his bandmates to branch off in terms of highlight moments. Check out the pumping progressive bass lines from Fredrik Petersson that penetrate the marching riffs of “Curtains (The Dumb Supper)” while Christian lays down some exquisite Maiden-esque meets Mercyful Fate breaks and galloping passages – and the semi-blasting shuffles that open “A Murder of Crows” from drummer Anders Persson set up this energetic transition-filled outing, vocalist Per Lengstedt adding some snarls to punctuate his higher King Diamond-esque falsetto screams. Different production techniques from the past also add some dynamic anticipation – the opening rhythm section passage for “Phantom Fathomer” gives off a bit of an older Metallica vibe, majestic in its triumphant nature while the main hooks kick into gear. Unlike previous albums where the longest track ended the record, “Ashen” is a nine-minute plus epic that appears to start side two (if you purchase the vinyl edition) – a perfect centerpiece containing tasteful acoustic guitars, cultural guitar lines with Viking/folk textures and mysterious progressive rock nuances against its true metal foundation. At eight songs and 52 minutes, there is enough material to process and enjoy while not exhausting its welcome – a logical successor to 2017’s Burn the World but individual in its own spirit moving forward with four more years of experience at the helm.

At One with None keeps Portrait at the forefront of a strong European metal scene that attains respect and admiration for the ability to promote the genre from a proper stance of originality. It’s not easy, but this is one of those records that sustains hope after numerous spins that the new guard can hold the flag high for this genre to not wither away anytime soon after the veterans retire or die.