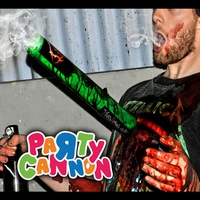 Don’t be fooled by the extra colorful band logo/name, comically disturbing artwork, or the song titles that are displayed on Party Cannon’s debut full-length. While it doesn’t look like a very serious outing, it doesn’t take long for the listener to realize that the band is the real deal. Even if you might be smiling throughout the album.

Party Cannon takes the more groove-heavy approach to brutal death metal, championed by bands like Dying Fetus, and layers it with some technical moments. It’s not exactly a unique formula, but Party Cannon lets the riffs do the talking. The groovy riffs are memorable and downright heavy, borrowing from the Suffocation/NYDM toolbox as well. “Russian Zombie Smack (Krokodil)” opens things up and doesn’t take long for this to become apparent. In some ways, the music itself (as well as the production) does a bang-up job replicating that mid-to-late ‘90s feel. To the joy and/or dismay of many, most of the songs on Bong Hit Hospitalisation do feature samples at the beginning. Most are short and sweet and don’t distract from the music, but they are also rather amusing. Particularly if you are fan of amusing/strange ones like Skinless used to do (see Progression Towards Evil). These, in combination with the song titles themselves (“Keg Stand By Me” and “Screech Even Gave His Body to Science”) give the band a quirky sense of humor that elevates them past the usual, deadly-serious bands.

If you like your death metal served up with plenty of tongue-in-cheek humor, you’d be remiss not to check out Party Cannon. The vocals are brutal, the riffs are devastating, and the humor is wicked. Come join the party!