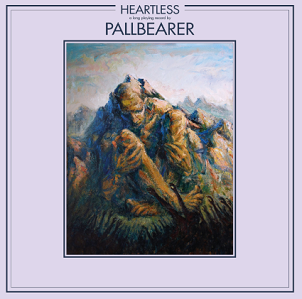 Hype has yet to get the best of Pallbearer. The Little Rock, AR doom/progressive metal collective have cultivated a devoted cult and critical following, one that has exalted all facets of their work. They’re a homegrown, unpretentious, forthright and hard-working band…surely there’s some kind of kink in their armor, right? Not so. Capitalizing on 2014’s largely brilliant Foundations of Burden, Pallbearer is back with their third album, Heartless, a transformative body of work that will easily extend their already flawless track record.

The once-prominent pure doom element of Pallbearer has gradually given way to artful, well-crafted progressive rock. Not like the band wasn’t artful before, but the breathy, wide-open trudge of opener “I Saw the End” and the excellent “Lie of Survival” find Pallbearer boasting crisp melodies to go along with their otherwise immovable riff template. Vocalist/guitarist Brett Campbell continues to evolve, carefully shading the songs and staying out of the way (“Thorns”) or getting down into the trenches on “Cruel Road,” perhaps the album’s most aggressive number.

The album’s penultimate cut is its last, “A Plea for Understanding.” Sounding like an Americanized 40 Watt Sun or Warning (no doubt both of Patrick Walker’s bands are of some influence on Pallbearer), “A Plea for Understanding” is Pallbearer at its most graceful. Interwoven guitar harmonies, a steady, but crashing beat, and of course, Campbell’s vocals make it one of the band’s most remarkable songs to date.

It’s not difficult to figure out why Pallbearer has been so successful. They are pure when other bands are artificial. They care about songcraft when others are more interested in technicality. And, they have tapped a vein that few recent bands have been able to tap. Heartless is easy to write about, but you’d be doing yourself a giant disservice if you let this one slip by.