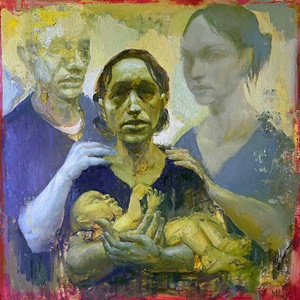 Arkansas act Pallbearer have made a solid connection in the metal scene through their melodic doom meets progressive rock/metal outlook over the course of their vast discography – including a mix of singles, demos, EP’s of a studio, live, and cover variety beyond the three full-lengths they’ve issued. Aligning with Nuclear Blast now on a worldwide basis, Forgotten Days continues to push the quartet through a myriad of comfortable turns, choosing to incorporate shorter arrangements at times while expanding atmospheric and broader textures in others. These eight songs assure an aural odyssey that features dynamic versatility on all fronts, allowing the listener to sink deep into the riffs, hooks, and swaying grooves present.

As guitarists Devin Holt and Brent Campbell set vivid pictures through their chord combinations, scaling things outward in a bluesy, thoughtful fashion through specific accents as if taking David Gilmour down a Trouble/Candlemass path on early highlight “Stasis”. Swaths of synthesizers add spacious, outer universe vibes colliding headfirst into the deeper recesses of the music, while drummer Mark Lierly and bassist Joseph Rowland elevate the epic twelve-minute plus “Silver Wings” to progressive bombast in the opening sequences, before the calmer, restrained clean guitars and morose distortion overtakes the feel, the despair peeling paint off walls. Brent as a vocalist again has a soothing clarity, taking in a lot of 70’s doom and progressive rock aspects to his measured melodies that mirror what you’ll hear from the instrumentation. The shorter four to five minute songs showcase a bit more of a refined, focused nature to the band, giving “The Quicksand of Existing” and “Rite of Passage” qualities that could get the band broader exposure – the wah-wah enhanced lead break in the former and the vocal harmonies that appear in the latter bonus touches to the good. Drawing from much of their personal loss of family and loved ones and how this has changed their viewpoints on life, it’s easy to take the lyrical content to apply to each individual listener and hopefully relate in a comforting, cathartic manner if need be.

Comparing Pallbearer albums can be like looking at various offspring – you love them all for different reasons. Forgotten Days finds the band asserting themselves in what they can do – delivering mesmerizing music that stands the test of time.