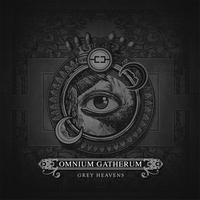 It’s been a treat to watch Omnium Gatherum work their way up over the years. Seemingly stuck in ‘middle of the road’ status, that all seemed to change when The Red Shift hit. With their next album, New World Shadows, it seemed the band had finally found their calling. Beyond finally brought them to a deserved place among the melodic death metal elite, and now OG has returned with its anticipated follow-up, Grey Heavens.

Tough to pick out favorites in this bunch, but special mention should go to “Frontiers,” “The Great Liberation,” and “These Grey Heavens.” “Frontiers” is just quintessential Omnium Gatherum, from the atmosphere to the vocals to the melodies. Probably one of their best songs to date. “The Great Liberation” follows a close second with its intense gallop that transforms into some simply serene melodies and leads that you’ll be hard pressed to get out of your head. Lastly, the instrumental “These Grey Heavens” starts off nice and mellow, easing you in before sweeping you away with some enchanting guitarwork and longing atmosphere.