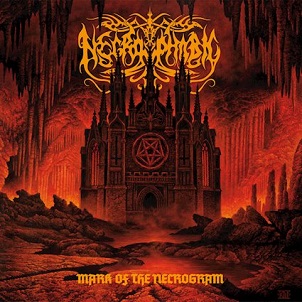 Always on the periphery of the firebrand Swedish black/death front, Necrophobic, for nearly 30 years and eight studio albums, have yet to produce their own Storm of the Lights Bane, although they’re inching closer with Mark of the Necrogram. Prior, the Swedes had mildly disappointed with 2013’s Womb of Lilithu and its 2009 Death to All predecessor, their evil, harmonic blend getting stuck in the mud ala their countrymen Naglfar. On Mark of the Necrogram, Necrophobic sounds invigorated. Took them long enough.

The spiraling speed-picking assault that jump-starts the opening title track is proof enough that Necrophobic can punch in black/death appropriately. The template is familiar, with a sidewinding riff leading the way with ample persuasion, which going back to what we uttered before, has been a missing element. The combos continue on the even better “Tsar Bomba,” an immediate, darting number, that settles into a Dissection-like groove.

Further explorations into the extremity wind tunnel come via “Pesta,” the album’s most diabolical cut, whereupon mounds of riff crackles and d-beat pounding come to a head. Elsewhere, the punishing “Requiem for a Dying Sun” and “From the Great Above to the Great Below” find Necrophobic dealing hard, buzzing guitar trade-offs, all within the framework of upper-echelon extreme metal.

Easily the most satisfying album of their career, Necrophobic, at last, has attained the poise and control to turn their normally good ideas into something of significance. And with the new Watain sputtering out before it could get going, one need not look any further than Necrophobic for the best Swedish extreme metal entrant of the year thus far with Mark of the Necrogram.