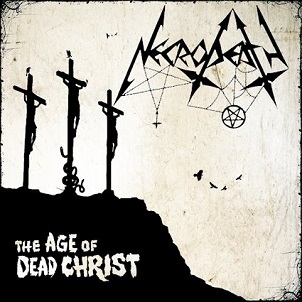 The longest-standing (to our knowledge) Italian thrash band, Necrodeath remain an arm’s length from the German thrash tier, which to everyone’s knowledge, has always dominated the European thrash scene. Pick and rifle through Necrodeath’s back catalog, and yeah, there’s some quality to be found by way of their Into the Macabre debut and Fragments of Insanity sophomore foray. However, there’s no must-have Necrodeath album, which may correlate to the fact they’re unflinchingly cult, something appears to hold sway on their 11th studio album, The Age of Dead Christ.

Hard not to close one’s eyes and mistake vocalist Alberto Gaggiotti for Destruction dude Schmier, a man whose snarl is imitable as they come. Gaggiotti, who goes “Flegias” in Necrodeath suits Necrodeath’s vertical, swerving thrash jams pretty well, though, lending the necessary amount of animation and frazzled vocal barks on “The Master of Mayhem” and “The Order of Baphomet.” And sure, there’s some patented Euro thrash moving down the pike on “The Kings of Rome,” while the brutal slants of “The Revenge of the Witches” make a run for Mad Butcher-era Destruction, which, in a way, means Necrodeath go right back to Destruction anyway.

Veteran thrash bands have found ways to refine their sound without sterilizing it. There is virtually none of that with Necrodeath, whose songs are mostly scattershot and only mildly memorable on The Age of Dead Christ. While not entirely indicative of Italian’s thrash’s overlooked standing in the global thrash scene, it is a reminder that other countries and bands do it better.