Summer is now in full-bloom (or full wilt), thus slowing down the year’s release schedule by a hair. Being that our friends in Europe are enjoying the riches of festival season and we’re left with the Rockstar Energy Drink Mayhem Festival (yawn), a certain amount of jealously exists, made all the more obvious that labels purposely scale back on releases so Euro revelers can revel in the various awesome festivals taking place every weekend. We’ll cast our grips aside and present this month’s Rapid Fires, which include: Cemetery Lust, Demonic Rage, Eths, Hellgoat, Hollow, Infernal Curse, Necrodeath, Opium Warlords, Pet the Preacher, Rude, Space Eater (pictured above), and Twilight Force. Read on…

This mash-up of Cannibal Corpse, Immolation, and Incantation is an interesting one yet entirely devoid of originality.  That being said, Demonic Rage knows how to hit the sweet spots.  Wisely alternating between faster, evil-sounding riffs and more gloomy, doom-ridden moments, there is a nice dynamic of tempos to keep things from becoming too similar (despite the gutteral vocals best attempts).  The guitar tone is thick and absolutely punishing, giving the music a more compelling sound.  It’s essentially the same thing you’ve heard plenty of times before, but one’s tolerance for death metal will ultimately be the deciding factor in your feelings for this one. – Kyle McGinn (Demonic Rage Facebook)

Eths – Ex Umbra In Solem (Seasons Of Mist)
A curious release full of curious pieces, it serves as both my personal introduction to French entity Eths and the knowledge that grind and nü-metal have been combined by at least one group in the world. That being said, this release varies wildly in quality, the ‘live’ middle section dominated by nü-metal heavy sections of repetitive and simplistic riffing pushing along the vocal histrionics of the band’s previous vocalist. There are some serious 1997 vibes here at times. The back half of this release features a new vocalist but a similar approach, the nü-metal largely replaced by generic deathcore/djenty stylings. It could certainly be worse but as it stands it just doesn’t present its case in an interesting enough manner to warrant anything beyond a cursory listen. – Matthew Bowling (Eths Facebook)

Hellgoat – End of Man (Boris Records)
Nothing quite like squandering an awesomely lo-fi name like Hellgoat with an equally lo-fi but unmemorable release like End of Man. Granted, it’s only a two-song 7” but it remains that the shorter the release the more imperative it is to make an impact with the songs placed on it. For this release that comes up a bit short, the <9 minutes of furious black metal tempered with bits of industrial and a whole lot of fuzzed out everything else. For collectors of the obscure this is the kind of release to go for if 7” releases are your thing but for everyone else, there’s nothing here. (Hellgoat Facebook) 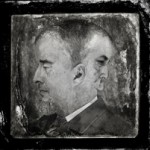 Hollow – Mordrake (Self-Released)
An up-and-comer in the always fertile Montreal metal scene, black metal brigade Hollow re-enact some of the pillars of the 90’s on their solid Mordrake foray. Keyboards are featured predominantly in the mix, while the occasional thrash buffer (“Cryptic Howling”) keeps the band’s songs away from sterile BM territory. The orchestral flourishes that make their way to the front on “Landscapes” are a keeper; the pulsating melodies found on “Vlad” certainly warrant another listen, and “Birth” puts on a quality technical display. (Gotta love the one-word song titles; a total rarity in black metal.) In all, pretty daunting and enveloping stuff, ripe for the Dimmu Borgir/Emperor contingent, who still have plenty of sway in black metal. Good stuff. – David E. Gehlke (Hollow Facebook)

Infernal Curse – The End Upon Us (Iron Bonehead)
Blackened death metal that alternates between high-speed blasting and slower Celtic Frost worship, it’s truly the production that sinks this one. Terribly muddy and far too raw, the higher speed sections are practically unlistenable. The cymbals are too high in the mix, the drums overpower everything, and the vocals use an odd, almost echo-y effect that makes them very unintelligible. Unintelligible is fine with death metal but the effects make them seem more sloppy than anything else. The slower sections work when they come, but overall this is one sloppy mess of an album. – Kyle McGinn (Infernal Curse Facebook)

Necrodeath – The 7 Deadly Sins (Scarlet)
If there’s an album that could’ve easily deserved a full review or, to say the least, proof that wicked-awesome albums are included in our Rapid Fires, it’s The 7 Deadly Sins. Formed in 1984, Italy’s Necrodeath are among the last surviving bands of the early death metal scene and 30 years later are morbidly perverted as ever. Between the cynically demonic-animatronic vocal style and overall blackened thrashiness of the music, Necrodeath put out everything that one could possibly ask for from an album called The 7 Deadly Sins. The first sin “Sloth” is everything but what it entails. Sloth/laziness is one sin that Necrodeath don’t commit in this album which is a good thing even in Satan’s eyes, no lazy metal here. Songs like “Gluttony” with lyrics as “I’m so hungry, I feel hungry… I want it to die” have interesting but semi-comic portrayals of our sins. Most of all, Necrodeath should be proud of what they did with “Pride,” the whole album at that, which includes two bonus tracks in addition to the seven sins. The only oddity is sometimes they don’t know when to stop and ineptly fade the sound out, it works but it’s still apparent they don’t know when to stop. On the other hand, that’s the core concept of a sin. – Bridget Erickson (Necrodeath Facebook) 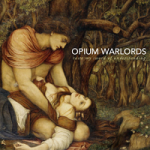 Opium Warlords – Taste My Sword of Understanding (Svart)
Reportedly 15 years in the making, Taste My Sword of Understanding is the final go at things from Reverend Bizarre’s Sami Albert Hynninen, a well-respected figure in Finnish doom circles. Therefore, it’s not unexpected that most of the album traverses minimal, droning doom paths. However, the tunes don’t trudge down funeral doom paths, instead working in some home-spun folk 60’s experimental rock channels on “In Melancholy Moonless Acheron” and the sole bass happening of “The Land Beyond the Pole,” which is accompanied by a simple, quiet drum loop. Very experiment stuff across the board and obviously, rather niche. Certainly a cool project to toss around esoteric ideas for Hynninen, if anything. – David E. Gehlke (Svart Records Facebook)|

Pet the Preacher – The Cave & the Sunlight (Napalm)
It might seem wrong to say that this album can only be sincerely enjoyed while dozing off or stoned, or both, but it’s true and that’s what stoner metal is all about anyhow. It’s not that The Cave & the Sunlight is boring or anything, it’s actually about as groovy, creepy and mellow as music can be all at once. It’s smooth like jazz, dense like sludge, gloomy like the blues and robust enough to be considered full-bodied heavy metal. Denmark’s Pet the Preacher are among the best heavy bluesy stoner metallers around, that’s for sure. “What Now” was definitely composed by the mentality of a stoner because precisely at 4:20 (assumedly all stoners know what 4:20 means) the bluesy rock style falls off the rail and from that point on to the end of the song, the gnarly spirit of sludge takes over and the doomy instrumental work matches up very nicely with the raw ‘n rough vocals. Everything on this album has two sides. The cover has a psychedelic two-faced eagle/man with gnarly trees, leaves and Indian arrows going in every direction. The title, The Cave & the Sunlight, is obviously a contrast between dark and light. But, the best duality of all is the music’s fabulous fusion of ugly and elegant. – Bridget Erickson (Pet the Preacher Facebook)

Rude – Soul Recall (FDA Rekotz)
Nothing rude about some old school death metal that doesn’t simply ape the masters. There is a nice blend of European and American death metal influences on display though Soul Recall, including Morbid Angel, Pestilence, and Master. An added bonus here is the very audible bass, showcasing a solid mix that lets everything be heard within the band yet is raw enough to avoid the newer and more sterile present day productions. Top it off with some cool artwork courtesy of Dan Seagrave and you’ve got a nice sleeper hit for those of you still digging that old school death metal sound. – Kyle McGinn (Rude Facebook)

Space Eater – Passing Through the Fire to Molech (Pure Steel)
Serbian thrash metal assuredly doesn’t gain a fraction of the attention that US or German bands get, which should make the third album from Space Eater that much more special. The wordy Passing Through the Fire to Molech contains 10 tracks of gallop-oriented speed/thrash, not dissimilar to latter 80’s Vio-lence, Overkill, and bonus points for those deep into the genre, latter day Intruder. Guitarist Luka ‘Tower’ Matkoviç has a surprising clear voice, playful in a melodic way on “Daisy Cutter” but vicious on the blitzkrieg riff monster “Exhibition of Humanity.” Those who enjoy scattershot tempos and a boatload of intricate shifts will find Space Eater delightful… but what is with the silly name? – Matt Coe (Space Heater Facebook)

Twilight Force – Tales of Ancient Prophecies (Black Lodge)
Adventure metal arises from the depths of Sweden on this debut album from Twilight Force. Throw down speedy power riffs, a boatload of choir chorus harmonies, and lead breaks/ keyboard symphonic elements in line with the best Rhapsody/Blind Guardian parts and you’ll get the gist of this 11 track platter. Bach and Beethoven would be pleased with their instrumental influence on cuts such as the Dragonforce-esque “Enchanted Dragon of Wisdom” or cinematic power ballad “Made of Steel.” Sharpen your sword and prepare for battle, Tales of Ancient Prophecies has plenty of unintentional ‘laugh out loud’ moments (“Swords of Magic Steel” and the bombastic “Fall of the Eternal Winter”) but I know plenty who will champion this OTT symphonic power metal. – Matt Coe (Twilight Force website)