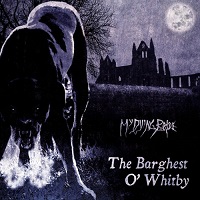 Afforded the opportunity to do exactly as they bloody please, My Dying Bride has made 2011 into a sort of “fun project” year. (Since when did MDB become fun?) First up was the orchestral Evinta, a reimaging of some of the band’s classic songs done with the aid of a full orchestra, and now the 27-minute, one-song EP The Barghest O’ Whitby is up.

By employing nearly every element the Brits have used in their magnificent career (doomy guitars, doomier lyrics, doom-laden violins, and doom-stoking guitar chugs), My Dying Bride is able to turn this singular song into a roller-coaster of emotions and shades, hosted by the always-dreary Aaron Stainthorpe. The long-anguished singer is apparently never out of gutting lyrical prose, so he’s able to spread his utter moroseness all the way across the song’s various hushed points and vintage death metal brushstrokes, where he puts his notorious death-grunt to use. Returning drummer Shaun Steels also proves to be a force, providing a punishing back-bone to complement the unearthly guitar sound produced by Andrew Craighan and Hamish Glencross.

An EP (or song) like The Barghest O’ Whitby has been long overdue for My Dying Bride. As a band that has a made a career out of creating prolonged audio emotional suffering (that sounds a tad too severe), The Barghest O’ Whitby is one blackened smear of darkness; basically five songs crammed into one seismic mass (or sea) of suffering.