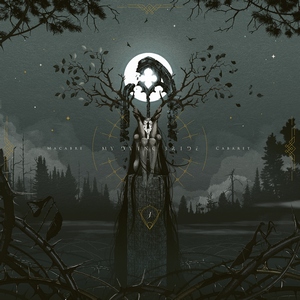 Earlier this year, My Dying Bride dropped an impressive release of doom in the form of The Ghost of Orion. One of the band’s strongest releases in recent memory, it was an exercise in misery and melancholy, just as the band has always put forth. Stemming from these same sessions is that of Macabre Cabaret, three more songs that ooze an introspective and gloomy tone that will easily resonate with despair.

The title track is a long and winding road of sorrow (a journey that lasts over 10-minutes). The melodies are thoroughly downtrodden and the pace is plodding, but it does an excellent job of drawing you in. The riffs are longing and reflective, and the atmosphere has an eerie and haunting feel to it. A distinctive, soul-crushing weight bears down on the listener as you move forward through it but it does offer some catharsis and peace to it by the end. “A Purse of Gold and Stars” is the quietest one of the bunch, focusing more on mood and atmosphere than anything else, offering spoken word and piano for the most part as it. The final new track, “A Secret Kiss” is the heaviest of the bunch, featuring more gargantuan and lumbering riffs for Aaron Stainthorpe’s croons to wrap around (and a few growls as well). For those snagging a physical copy, you can also hear an orchestral version of “Your Broken Shore,” which is a nice treat for fans as a gentle and affecting version of one of The Ghost of Orion’s highlights.

My Dying Bride have had a rather strong year in 2020. Macabre Cabaret is a short but effective way to really revel in some misery and despair if you didn’t get enough of it with The Ghost of Orion. Oppressive stuff, but we wouldn’t have it any other way from these doomy champions.