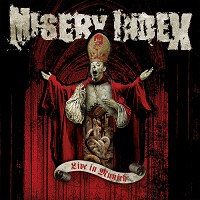 Surely there is a rather large segment of those out there who have been to a death metal show. And at these shows, the audience is usually called upon to disengage from the traditional arms-crossed/tough guy stance. The band on stage tries their hardest to get some sort of reaction (i.e. moshing), but to no avail. That’s what it feels like while listening to Misery Index’s utterly unnecessary live album, the aptly titled, Live in Munich.

Captured during the band’s 2012 European run with Cannibal Corpse and Legion of the Damned, Live in Munich provides an ample cross-section of the band’s four full-lengths, with a quality production job to boot. Album versions of “The Carrion Call,” “The Great Depression” and most notably “Traitors” have considerable merit to them, specifically in the manner in which Misery Index jousts between dicey brutal death metal, and mosh-addled rhythms. This live set, though, doesn’t provide any sort of alternative other than to gawk at bassist/vocalist Jason Netherton’s in-between song banter, where he does the exact type of pleading we noted above. (Note to singers: Encouraging people to get “fired up” usually means they’re not fired up for a reason.)

Nothing screams contractual filler like a live album. Few things are as worthless as a death metal live album…Misery Index should know better.