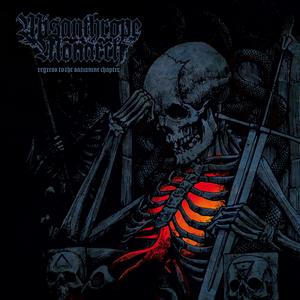 It’s nice to find new death metal bands that have the fortitude to go their own way and ditch the trends. The German-based Misanthrope Monarch are about to release their first full-length album (following a 2014 EP) and it’s refreshingly straightforward. This is death metal – no additional descriptors are necessary.

What’s easy to like about Regress is that it never attaches itself to any added subgenres. It’s just well-written and performed death metal, played in a timeless style. They don’t make things unnecessarily complicated in the riffing department, they don’t overdo it with atmosphere (though some epic melodies in the mid-tempo are duly noted), and nor do they take things too far in the old school direction. It’s brutal, it’s aggressive, and yet it never dulls the senses over the course of the album. They can really bring the speed, with thrashy rhythms intact (see “Usurping the Throne”), and the focus on solid writing arrangements makes it easy to move along with the band without feeling like they take it too far. Near-bouncy grooves enter with some tracks, like “Father Sin and the Hollow Spirit,” and make the mid-tempo really shine. It’s also nice that they don’t stick to just blasting the drums and seeing how brutal they can be as well – melodies are seemingly present in each track, adding their own atmosphere into the mix without causing it too mellow out too far (see “Trail of the Heretic”).

A solid jump from their EP, Regress to the Saturnine Chapter is enjoyable, honest-to-goodness death metal. The type of thing that will give you the requisite brutality you are looking for, but with the musicianship that assures that it won’t be a blur at the finish. Misanthrope Monarch is one to watch.