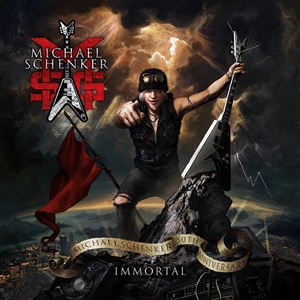 Celebrating almost 50 years as a music artist, Michael Schenker for many deserves his wunderkind status – playing with the Scorpions as a teenager, achieving worldwide success at 22 with UFO during the Lights Out album. During the 1980’s he established the Michael Schenker Group – to which he returns for this Immortal album. Originally planning to have a smaller, cohesive recording lineup, the COVID-19 virus threw a big monkey wrench into the mix. Through the assistance of veteran comrades, he assembled a professional mix of musicians to achieve his desired results of a ten-song record that showcases his love of melodic hard rock and heavy metal, a mix of catchy anthems and thoughtful arrangements that has amazing singers, rock solid keyboards, tight rhythm section work, and Michael’s majestic guitar action throughout.

On the metal side of things for those who live heavier/speedier tracks, look no further than “Drilled to Kill” which features Ralf Scheepers and his Halford-esque leather lungs – while “Devil’s Daughter” showcases a bit more of a bluesy ramp up riff for Ralf to rear back a bit to some 70’s reference points (think Led Zeppelin/Whitesnake). Current Rainbow singer Ronnie Romero channels his best Ronnie James Dio angles for another highlight “Knight of the Dead” – adding sultry lower ‘ohhs’ against the driving musical mainframe. A bass mini-gallop rolls perfectly against the guitar accents on the Joe Lynn Turner-delivered “Sangria Morte”, while the closer “In Search of the Peace of Mind” is the longest cut at 6:27, a fresh recording of a song that Michael wrote at 15 years of age, the lead break mesmerizing in terms of flow, pace, and intuitive feelings – proving the man doesn’t have to always play at shredding magnitude to get the right atmosphere and emotions from his guitar to your ears. There’s a reason why everyone from bassist Barry Sparks to drummers Brian Tichy and Simon Phillips as well as keyboardist Steve Mann to co-producer/lyricist Michael Voss all want to be on board to help Michael achieve the optimal output. His attention to detail, his grace, and his abilities for guitar play, songwriting, and performing are second to none – thus why he’s influenced multiple generations and the development of other genres under the metal / hard rock umbrella.

Immortal for the Michael Schenker Group is another testament to the gift of a man who’s still in the prime of his life as far as creativity – and we should treasure and enjoy the ride while it lasts.