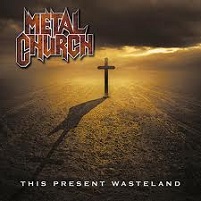 Munroe has proven to be a viable commodity, although he’s given very little to work with save for the strong chorus of “The Company of Sorrow” and brooding “Deeds of a Dead Soul.” Tunes like the goofy “Monster” won’t help his cause, neither will “Mass Hysteria.” When Munroe does get the chance to test his vocal mettle, he proves to be a more edgy Dio, yet without the tenderness and conviction of our favorite thumb-less balladeer.

Never a full-on thrash band, Metal Church stays true to that credo, with more mid-tempo, rock-oriented numbers like the drab “The Perfect Crime” and throwaway “Crawling to Extinction.” The slower “A Ware Never Won” follows suit, disguised as a partial ballad, only to be tempered with a Southern-fried riff sequence that kills any real momentum.

This is the sort of predictable, run-of-the-mill stuff that turns once great bands into nostalgia acts. The pervasive need for tunnel vision, no matter how great one’s past (the self-titled debut is still a classic) is what ultimately hurts Metal Church in this instance. Shame, ‘cause they were onto something A Light In the Dark. Now it’s just lights-out and back to the drawing board. And maybe a re-examination of the totally unheralded The Dark while we’re at it.