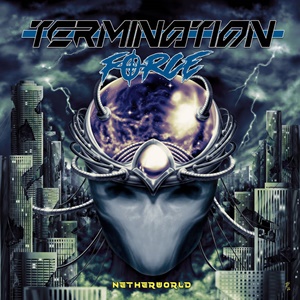 A UK quartet featuring musicians in other acts like Toledo Steel and Desolator, Termination Force arrived on the scene last year – releasing a two-song demo at the beginning of 2022 to set the stage for this EP Netherworld. Specifically concentrating on an era of late 80’s/early 90’s melodic metal with ties to US/German influences, these five songs contain a lot of upper tier hallmarks that put artists like Savatage, Metal Church, Liege Lord, and Blind Guardian on the map.

Crunchy power riffs lay the foundation of the band’s main attack – along with rhythm section mechanics that are straightforward while injecting the right transitional highlight bursts to keep people riveted. The stop/start gallop-oriented music allows vocalist Rich Rutter ample chances to hit peak falsetto screams as well as glide effortlessly up and down a versatile powerhouse register – the kind that James Rivera, Rob Halford, and Geoff Tate deliver in their prime as “Target Locked” illustrates. Sci-fi lyrical themes go hand in hand to the little spacey atmospheric touches that creep in from time to time – the keyboard angle to start “After the Fall” one clear example along with the distant vocal echo effects. Bassist David Lovell possesses that Steve Harris-like prowess on the closing mid-tempo title track, where guitarist Jamie Brooks lays down some bluesy, shredding/melodic spots against his conventional driving rhythms. In fact, the only disappointing aspect to this EP may be that just as you get into this, it’s over in a scant 18 minutes – as the skills, songwriting, and performances are on par with the era/influences that choose to pull from.

You don’t hear heavy/power metal quite like this from many artists these days. Which could be a blessing (or a curse) for Termination Force. Hopefully Netherworld finds the right appeal for those old-timers who miss killer singing, sturdy riffs, and a steel-like magnetism that hopefully will be explored more in future releases.