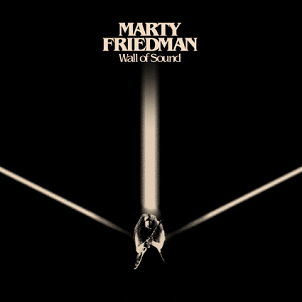 Now that all the conjecture and “will they or won’t they” is over with regard to a possible Rust in Peace-era Megadeth reunion, both the band and former lead guitarist Marty Friedman can advance forward, however that may be. Friedman’s 2014 Inferno solo opus was really quite good, succeeding in shutting up the gallery who thought the man’s career would forever be relegated to Japan, where he is a star. It’s a tougher climb in America, though, even with Megadeth on your resume. But give Friedman this: He is doing his absolute best to stay fresh and exciting, something reflected on his 13th solo outing, Wall of Sound.

Following in the avalanche of tasteful guitars approach found on Inferno, Friedman’s noted and rather distinguishable blend of exotic soloing and crunchy riffing enables him to create instrumental cuts that are more than standard fare. You somewhat get the feeling extreme metal lurks in the background when Friedman is assembling these cuts–opener “Self Pollution” and Deafheaven collaboration “Pussy Ghost” certainly drive that notion home, particularly the latter, a band no doubt far removed from Friedman’s thrash zone, but bendable enough to cut a collaboration that works.

“Whiteworm” is clearly the album highlight here, a bouncy, near guitar-jumble of a track where Friedman’s fretboard dynamics and penchant for outside-of-the-box sounds creates a veritable kaleidoscope. And that’s really the idea here: Heralded guitar player works diligently to get out of his comfort zone, proceeds to show up his contemporaries in the process, all the while reminding us long-time bangers that he remains one of metal’s most unique guitar players. That’s Marty Friedman in a nutshell. Wall of Sound is stellar.