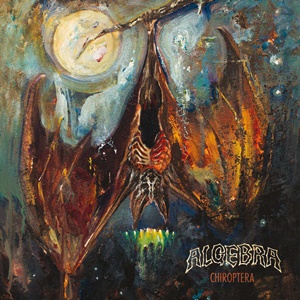 Reliable when it comes to a brand of semi-technical thrash metal with progressive and extreme nuances, Swiss act Algebra return for their fourth album in the uniquely titled Chiroptera (an order of mammals that comprises the bats for those wishing to be in the know). Already avid followers through 2019’s Pulse? record, the spooky bat-adorned cover art courtesy of Adam Burke sets the stage for another whirlwind eleven track outing, where tight, shapeshifting rhythms, equally exciting tempo transitions, and a bevy of musicianship tricks/nuances lead to another power-packed effort to unpack, processing the little details for another exhilarating odyssey.

The exemplary rhythms, harmony accents, lead breaks, and other subtle tweaks from the twin guitarists Ed Nicod and Nick Abery ensure intense, headphone-type examination for the fluid construction that can take place song to song. There’s so much to look at from the speedy leads to restrained, circular rhythms during “Constricted” next to the chunky, Forbidden meets Anacrusis-esque parts for “Eternal Sleep” – and that’s just two songs of many where these men dazzle. Beyond the conventional songs you’ll get two shorter instrumental tracks for “The Fallen” and “Losing Touch” which display some of their classical, progressive textures – serving as audio cleansing for the next proper speedy arrangement. Bassist Victor Brandt (also in Dimmu Borgir) plus drummer Florent Duployer possess equally impressive musical chops – turning on a dime sometimes in time signature flips, intricate progressive sequences, then laying into a solid foundational groove to make “Resuscitation” and “Suspect” highlights, especially for those into Coroner, Heathen, and early 90’s Megadeth. Although the measured roar of Ed vocally may not necessarily match the musical proceedings in terms of outstanding prowess, he continually embarks on this eerie, clear ambiance that is compelling enough to entertain most who tire of solely ‘screaming’-style singing.

A thicker, crunchier guitar tone gives Chiroptera stronger production values – a plus for those who want Algebra to stand shoulder to shoulder with many of their Bay Area / European influences. Choosing to keep these songs in smaller constructs, ardent fans of semi-technical thrash in the progressive mold will savor this record for years (or decades) to follow.