Maladie – Of Harm and Salvation (Apostasy) 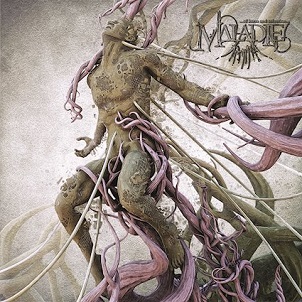 Concept and exploration over execution…such is the battle for German mondo-progressive metal act Maladie. Their 2016 effort Symptoms proved to be a bit of a bog in that it had too many conflicting ideas to rustle up cohesion or even enjoyment, for that matter. They’re really one of those “we’ll try anything” kind of bands, throwing in various influences from death metal to jazz to avant-garde to doom to melodic metal. It’s all there and it’s not always an experiment gone right, although their fourth full-length Of Harm and Salvation seems to put the Germans on the right track.

Almost at will, Maladie never double-down on their efforts here. It’s like they try one type of song, get bored with it, then move onto the next. The opening near-Goth swoon of “Desiderium” is never matched for the rest of the album; it only heads further into experimentation, although “Profunditas,” with its weeping guitar lines and jousting blast-beats makes a run for it. The side-jazz, avant-garde quirks that make up “Depugnare,” “Oblivio” and “Abominaris” are positioned in a way as if Arcturus and Solefald had breakfast together then decided to trash the place, where upon bursts of death metal extremity and manic vocals hover alongside the table with dissonant chord choices and odd time signatures.

It is almost unilaterally, a treacherous hill to climb with Maladie, who at times, can make a moment or two out of things. For them to do it over the course of an entire album with so many ideas being tossed about may not be in the cards, but on Of Harm and Salvation, at least their creative restlessness has a purpose, whatever it may be.