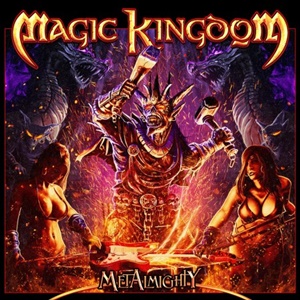 Choosing to open the record with the longest track at 8:45 “Unleash the Dragon”, all your senses come alive through the bombastic patriotic instrumental charge, double kick and guitars blazing, the chorus circling the wagons as Dushan sends speed arpeggios to the heavens before Michael’s main verse melodies kick in resplendent glory. It’s an appropriate start in uplifting the mood and getting things off to the proper energetic atmosphere. The cultural/folk textures within “In the Den of the Mountain Trolls” are quite heroic, Michael matching the pacing of the keyboards/guitars during the verses while the chorus could remind many of classic 70’s Styx as its full of pomp and circumstance. Overall Dushan shines with his exemplary shredding plus power/speed licks and riffs – it’s hard not to get swept up in the thunderous axe mastery for “Fear My Fury” or his restrained, classy motives in a slower number such as “Just a Good Man”. The toughest selling point for complete enjoyment is the fact that at eleven songs and 61 minutes, MetAlmighty may just be a bit over-winded for its own good – a case of what Yngwie would claim as ‘more is more’, when less could indeed placate those who feel ear fatigue at too many notes flying in too fast to process. By the time you get to tracks ten and eleven (“Dark Night, Dark Thoughts” and “King Without a Crown”), as solid as those songs may be, many consumers may have moved onto another record to cleanse themselves of the shred, syncopation, and incessant double bass/bombastic overtones.

Magic Kingdom live for the days when Rising Force was the rage in the 80’s – so MetAlmighty has its place in the context of neoclassical speed/power metal. It’s just something that you have to be in the right mood to listen to more than once in a while.