Neo-classical oriented power metal with symphonic touches probably begins with Yngwie J. Malmsteen and his early efforts in Rising Force – but we know that there have been others that took that inspiration to start their own bands. As a teenager, Belgian guitarist Dushan Petrossi would be one of those axe slingers that took that inspiration to develop Magic Kingdom in his mid-20’s – fueling his speed licks and arpeggio/ tapping breaks with this sense of melody, always making sure to surround himself with strong vocals and musicians able to execute his songwriting in a professional manner.

The Savage Requiem is their fourth studio album in 16 years – but it’s not exactly been an easy go of things. Between record label law suits, member changes, and natural life transitions (during which Dushan would also develop Iron Mask, who have released five albums of their own), the band has tried their best to remain steadfast in their neo-classical, power metal dealings. Signing with prominent record label AFM probably helps reaffirm their commitment, as the band intends on being more of a viable act on the live front.

Gaining a wonderful Skype connection, Dushan is quick with answers but very enjoyable on a conversational level. Be prepared to learn about the state of young guitarists, his crossroads between metal and football (soccer to us North American folks), and all things related to Magic Kingdom and Iron Mask in this 20 minute chat.

Dead Rhetoric: Let us know what your early childhood memories were surrounding music in Belgium, first records you heard, and what spurred you on to pick up the guitar?

Dushan Petrossi: Oh yeah. I was very young, 6 or 7 years old I think and my oldest brother had an acoustic guitar at home. As a child you want to try something, and I fell in love with it. I had an electric guitar when I was 10 years old. One of my first records I bought was by Michael Jackson (laughs), it is not usual. Then I went to more guitar oriented material like Iron Maiden, Gary Moore, (and) the late 80’s metal bands.

Dead Rhetoric: Can you think back to any exact/specific moment when you knew your style of play had reached an advanced level?

Petrossi: There (are) no secrets. If you want to be good you have to practice like hell every day. There are a lot of sacrifices if you want to reach a certain level of playing, hours and hours a day. That’s something that I do remember, not even going to school as I would stay home playing for hours. My mother would go to work in the morning, come back later in the evening and I was still playing then. I realized I could play very fast at 13 years old, and I could play more advanced and virtuoso stuff. I didn’t start playing neo-classical material right away, but years later I discovered tapping and string skipping, scales and notes. If you have passion and you love that you will do it hours and hours, you don’t see the time. No lessons, I did things myself with no teacher. I would listen to tapes and vinyl records, just my way of learning.

Dead Rhetoric: Magic Kingdom has released 4 albums since starting in 1998 – outside of the fact that you also write and perform with Iron Mask, are there specific reasons why you prefer a longer waiting period between records?

Petrossi: Actually, the record label fiasco was fate. With the first label Mausoleum, we were blocked from releasing any more records for a few years. We had to sue them in court, it took 3-4 years to settle and win the case. Finally it was 5 years before the second Magic Kingdom (record) came out, and then after that we had a lot of work with Iron Mask, two or three albums in a row. I never forgot about Magic Kingdom, it was my first band and its neo-classical metal. It takes a bit more time, now we are on AFM Records along with Iron Mask and Magic Kingdom, so the next Magic Kingdom will be out much sooner, probably in 2017.

Dead Rhetoric: How do you separate your work between Magic Kingdom and Iron Mask? Are you always coming up with ideas and then filing them away for whichever act you think they work best- or are you the type of musician that writes to order in terms of what you are working on at that time?

Petrossi: Yeah, when I start an album I know whether it will be for Iron Mask or Magic Kingdom. I just write, Iron Mask is a bit more heavy rock, more Dio style, less speed metal. It’s still symphonic but a little less than Magic Kingdom, which is in the spirit of classical, Baroque era. There are a lot of layers of symphonic elements which I don’t have in Iron Mask. I know it’s going to be more speed metal, real symphonic elements in the music.

Dead Rhetoric: Savage Requiem is the new album – and first for Magic Kingdom with vocalist Christian Palin. Were you familiar with his previous work in Random Eyes, and what necessitated the singer switch?

Petrossi: Yes, I heard some stuff he sent me before he did the auditions. I was trying to imagine how we are going to sound in Magic Kingdom’s style. He did a couple of songs and I could tell he could really sing. The most important thing is he has a wide vocal range, very low and high and in different ways as far as melodic or aggressive. And that’s what I really wanted because I want a singer with aggressive sides and not only clean, melodic parts like we had in the past. Whatever you ask it’s great from him.

Dead Rhetoric: What challenges or surprises came up in regards to the songwriting, recording, or production aspects for Savage Requiem? Do you find the art of recording easier or more difficult as times goes by?

Petrossi: The most difficult thing is the more albums you have the more difficult it is to create something that you haven’t already done before. It’s not really difficult for me to come up with a song, I pick up a guitar, keyboard, bass, or drums and start to come up with ideas for a song. I want to come up with something that’s different and has the quality of the material that I’ve developed in the past. No real surprises in this album, you reach a certain level of quality and I guess that’s the real surprise after so many years of doing this. I’m surprised when I can create a really good melody, I can see people singing it and that keeps me going on. 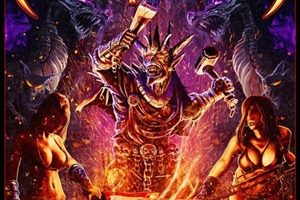