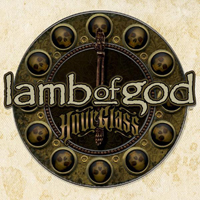 Critically important to the American metal scene, Lamb of God are at the present time, the preeminent metal band in North America. They’ve done it the hard way, through relentless touring, raucous live shows, and songs that in spite of their near constant uniformity, have managed to connect with a sea of young and old metal fans. This might be a reach, but they’re the closest thing this generation has to a Pantera. Again, that’s a reach.

Hourglass is a three-disc compilation of the band’s five studio albums, coupled with unreleased songs. Disc 1 (titled “The Underground Years”) covers the band’s stint on Prosthetic Records, who released 2000’s New American Gospeland 2003’s As the Palaces Burn, as well as the pre-Lamb of God, Burn the Priest. Most of these songs are firmly embedded in a lot of psyche’s, most notably “Black Label,” “Ruin,” “11th Hour” (which is the band’s best song, hands-down), and routine set closer “The Subtle Art of Murder and Persuasion.”

Disc 2 covers the band’s recent Epic Years (hence, “The Epic Years” title), highlighted by “Walk With Me In Hell,” the fast-paced “In Your Words,” “Now You’ve Got Something To Die For” and the Pantera-derived “Redneck.” Let us not forget about “Laid To Rest,” the band’s first real single of any kind, with ready-for-Headbanger’s Ball chase-down video to boot. Man, remember when LoG were on that show constantly?

Various oddities and bonus tracks comprise Disc 3 (“The Vault”), a move that most bands eventually wise-up to when they’ve accumulated such a mass of songs. Oddities go all the way back to the Burn the Priest days, with live renditions of “Lame” and “Duane.” Per Lamb of God’s usual songwriting pattern, a lot of these songs are virtual throwaways, namely “Condemn the Hive” and “In Your Words.” Such always been the case with these guys – you’ll get a handful of better-than-average songs, then a wealth of samey, mediocre jams that do little to differentiate themselves.

Our squabbles with Lamb of God’s catalog aside, Hourglass is proof-positive of how monstrous the Virginia metallers have become. If anything, this is another career milestone for the band, who have managed to successfully outrun Shadows Fall and out-metal Killswitch Engage, all the while staying at the forefront of modern American metal. Guess that “Pure American Metal” tag the band brandished in their salad days worked out after all…