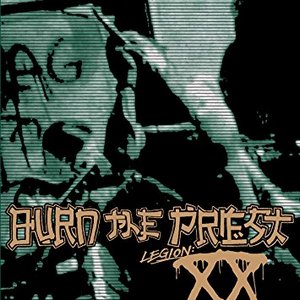 What do you do when you are arguably one of the largest modern metal bands of today and you approach your 20th anniversary as a band? If you are Lamb of God, you ditch the name and go back to your roots. Hence, the Burn the Priest name. But they’ve gone one step further in returning from where they came – Legion: XX is a cover album of crossover, punk, noise, and hardcore songs that influenced the DNA of the band itself.

The first notable impression that Legion: XX leaves is how much fun the band seemed to be having in the creation of this release. Far from a mere cash-in (as some bands might approach), there’s a level of genuineness that permeates the album, and the fun factor is infectious. Just check out the cover of Ministry’s “Jesus Built My Hotrod” if you want to taste this sensation – the way that they have paid homage to the original while giving it a little extra groove and bounce may be worth the price of admission alone. Much of the album is pretty high tempo stuff, given the genres that they are pulling from, and it is cool to hear some cult classic tracks (such as S.O.D.’s “Kill Yourself” and The Accused’s “Inherit the Earth”) given a frantic update with some distinct Lamb of God flavor. Randy Blythe also nicely gives the songs the vocal feel that they need, with some clean-ish singing in “I Against I” and “Dine Alone” that aids in giving some additional variety while staying in line with Lamb of God’s last full-length release, Sturm and Drang.

With the last Lamb of God album coming out in 2015, one does long for a new, fully original album. However, Legion: XX is an excellent throwback to the band’s earlier days and influences and more than worth the attention of any fan. They are bound to be turned on to a new band or two in the process (particularly younger fans) due to the choice selections. In the end, Legion: XX is a passionate celebration of where Lamb of God has been, with eyes still facing ahead to their future.