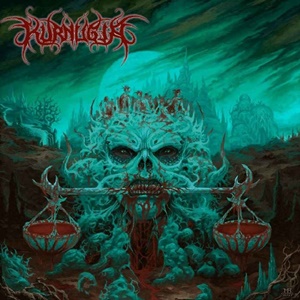 Ohio death metal act Kurnugia may have modified their lineup a bit in the interim between recordings, but it doesn’t diminish their old school death attack on this new full-length Forlorn and Forsaken. Expanding to a quintet with second guitarist Dylan Gordon and new vocalist Paul Gorefiend, it’s evident from beginning to end that these gentlemen stand tall for the early to mid-90’s era of this genre, when a mix of European spirit (especially of the Swedish variety) careened headlong into the heaviness and brutality of the North American scene.

The performances and songwriting adhere to a mix of stop/start speedy riffs and transitions that can be mid-tempo to doomy, never wavering from those evil, low-tuned guitars and equally convincing growls that are deep but discernible sans a lyric sheet. Paul is equal to the task of matching the feel and atmosphere of certain passages musically, while the guitar play of Dylan and Larry Kozumplik can be frantic and semi-melodic when called for – check out “Shroud of Damnation” for a mix of tribal-oriented plodding riffs and semi-blasting mechanics during the up-tempo, tremolo-driven sections. You can sense an affinity for Bolt Thrower, Benediction, and Obituary on one side, but then a mix of Entombed, Grave, and Edge of Sanity on the other – a quicker number like “To the Cursed Depths” providing that swirling energetic start, while “Decaying Serenades” delivers the back and forth balance of slower, churning parts and blitzkrieg riffs to keep the listener attentive to the changes in a longer 5:22 timeframe. Possessing decades of seasoning in other bands before this, you know these musicians understand their craft and write/perform from a place of passion – they aren’t looking to hop on any ‘old school’ bandwagon, as they grew with the original movement and were active participants in its evolution. The greenish hues on the ominous cover illustration also adds a unique touch, while the production is solid and true to the genre – keeping things on an even keel for the clarity versus heaviness angles.

While many look overseas for the best in primal death metal, Kurnugia are here to let the metalheads know that American bands can still be brutal and catchy in their own regard without being insanely technical. Forlorn and Forsaken keeps the focus where it should be – at headbanging, crushing levels that all maniacs treasure. 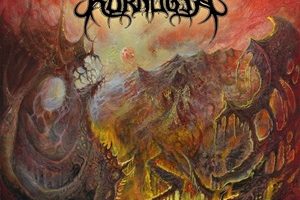