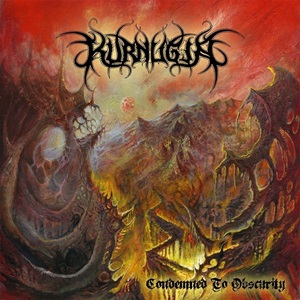 Featuring members of December Wolves, Decrepit, and Delusion, Ohio quintet Kurnugia have a ton of experience at the death/extreme metal helm. Pronounced kur-noo-jee-uh and a Babylon mythological term for the underworld, Condemned to Obscurity is their second EP since their inception four years ago, as Tribulations of the Abyss hit the streets in 2013. Some may consider the make-up of this six-song effort a little bit of the old (the two Tribulations songs appear here), a little bit borrowed (Autopsy and Grave covers), plus new songs to fill things out. A marriage still steeped in tradition, you’ll get the feeling after a few run-throughs that old school American and Swedish death reigns supreme in these musicians regular listening habits.

Expect thick riffing that has that low, evil, crunchy feel that made speakers shake and ears quake, as vocalist/guitarist Duane Morris lacerates the airspace through his growls that are remarkably discernible (think Incantation or Dismember here). Natural raw drum tones give the snare and double bass work conviction beyond belief, many listeners will be thankful as “Divinity Denied” and “Diseased Angels” appear to feel the energy without succumbing to a compressed, almost clinical/cyber feel in the production department. Guitarists Morris and Larry Kozumplik fill out the tremolo picking and steady death rhythms with possessed lead breaks, embracing a tradition set forth by Death, Immolation, and Entombed. Certain riffs trigger throwback moments, as the opening elements to “Abysmal Descent” possess this riff/groove symbiosis that put Death on the map for “Pull the Plug” – but quickly transitions into more of an up-tempo crusher with bassist Brian Bergeron and drummer Chris Dora setting the table for low end brutality.

“Pagan Saviour” sounds as robust in Kurnugia’s world as it did back in 1990 for Autopsy’s seminal Severed Survival record, while “Into the Grave” reminds us of the sick mid-tempo to slightly faster / pounding groove riffs and guttural simplicity that put Grave in our hearts right around that same time- period. It’s one thing to respect death metal’s legacy, and quite another to achieve your own stamp on things. Kurnugia prove that the old-fashioned train of thought when executed can maintain vitality, and as such Condemned to Obscurity should be another mandatory product for underground followers to treasure. 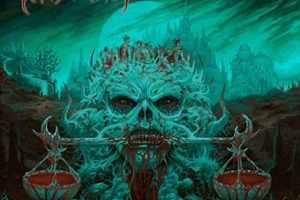