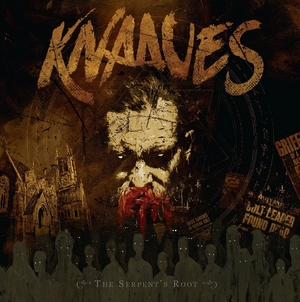 Dark and oppressive hardcore isn’t exactly something that’s shooting its way to the top of the music scene currently, but it is something that’s a welcome sight to this scribe. Knaaves previously released a two-song introduction to themselves that laid the groundwork, something that The Serpent’s Root takes to the next level in many ways.

Knaaves is nothing less than caustic and heavy. The guitar tone on The Serpent’s Root is joyous in its vitriolic feeling – something that will blow through your speakers and fits well with both the band’s lumbering mid-tempo as well as some faster moments. It’s quite angry and fits perfectly with the barks of Andy Parmann (and occasionally Amanda Daniel’s backing ones). It’s also laced with some melody without lightening the tone, as songs like “Down in Flames” can attest. The darkness is a cathartic one, as opposed to simply wallowing in it, and the band’s approach to bleak current topics is one that’s thorough and thought-provoking. It is a bit on the short side overall, with only six tracks and a ‘mood-builder’ in the form of “The Sermon.” But what is here never fails to be abrasive and thick with monstrous grooves, and there’s the potential for some greater diversity in the band’s future with the closing “Ouroboros,” where the crunching guitars are traded for industrial pulsations that continue the same strain of darkness but present it in a different form. Combining the two forms in the future could prove to be quite fertile.

The Serpent’s Root is a gutpunch of darkly metallic hardcore. While it could be a little longer, there’s plenty of potential that’s locked in from Knaaves’ bleak and grounded approach to hardcore. One that should feel refreshing in its execution compared to much of the hardcore scene.