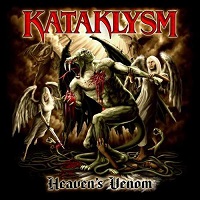 The Canadian hyper-blast death machine rolls on as Heaven’s Venom careens against the public for Kataklysm’s 11th studio record. A testament to undying commitment to their style, the quartet know what they desire to achieve with their music and the internal chemistry (the last original member leaving 12 years ago) illustrates plenty of creativity still pouring through their fingers, feet, voices, and instruments.

Witness the military mid-tempo rhythmic charge throughout “Determined (Vows of Vengeance)” as vocalist Maurizio Iacono bellows from the depths of his soul. It’s as if we are carried back to the fine times of Slayer circa South Of Heavenonly to watch the fleet foot kit work from drummer Max Duhamel make air drummers of us all in the follow up “Faith Made of Shrapnel.”

There seems to be more of an emphasis on guitar melodies and harmonies, especially throughout the mid-tempo material such as “As The Wall Collapses” where Jean-Francois Dagenais takes center stage with some free flowing arpeggio-laced shred ability. Do not worry though, Kataklysm still like to throttle the listeners with those insanely quick speed picking parts, especially evident in the opening track “A Soulless God” and “Suicide River.”

One of their most diverse efforts to date in terms of flexibility and versatility with their tempos and dynamics, Heaven’s Venom will not throw the long timers for a loop and may gain some of the new breed who appreciate the traditional and thrash touches without any extraneous, unnecessary breakdowns.