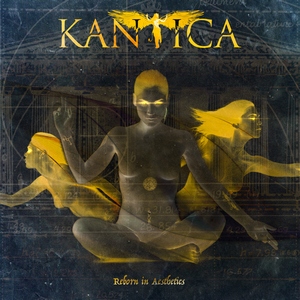 After forming back in 2014 and overcoming some line-up changes, Italian symphonic metal squad Kantica present their first full-length release, Reborn in Aesthetics. With so many similar bands in the genre, there really needs to be something in a new act to make them stand out. Kantica may not have that aspect completely nailed as of yet – but the performance here is such they are well on their way to carving out their future niche.

Kantica cover all of their bases, with a debut that is familiar yet diverse. Leaning more towards power than symphonic for much of the album – there is a pleasant amount of bite coming through the speakers when tracks like “Albatross” and “Psychological Vampire” crank up the speed. Headbangable, crunchy riffs show Kantica as being able to play off everyone’s performance – not fit to simply rely upon vocals to carry the brunt of the load. The energy is infectious, and when they do decide to unleash the more upbeat synths (“And Then There Was Pain” or “Mescaline”), they have the chops to back it all up. The shifts provide some dynamic for the band to play off of, as well as broaden their appeal into the power/prog fanbase. Chiara Manese hits all the right notes from a vocal perspective, again with more of a soaring power metal flair at times, further upping the energy factor, even in the quieter moments like “Lovecide,” which thankfully eschews traditional ballad territory.

Reborn in Aesthetics doesn’t really venture too far into uncharted territory, but it pulls no punches when it comes to riff territory. There’s a solid blend of catchy guitar melodies and pleasingly heavy riffs to go along with the bouncy synths and strong vocals. Kantica have established themselves as being able to execute all the textbook maneuvers, and as they continue to inject their own flavor into the mix, should be a name to keep your eyes on.