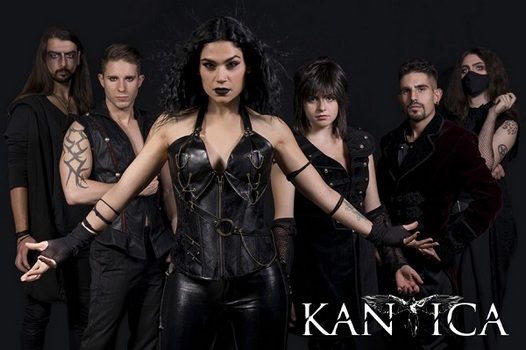 It’s not always easy to start up a band. That doubles for heavy metal, where it becomes quite clear that one isn’t going to make a glorious living off of it. A large number of change-ups can make or break things starting out, and it’s easy to toss in the towel as members come and go. But for Italy’s Kantica, who experienced a number of member turnovers (and a few name changes with earlier iterations), it seems their time has finally come.

Recently releasing their debut, Reborn in Aesthetics, it’s also clear that they aren’t going to settle for being labeled anybody’s clone. Steering the symphonic waters into more guitar-friendly and heavy territory, they broadcast a much wider frame of reference points as they play, yet retain enough familiarity to draw people in. We gathered some information from guitarist Matteo Venzano and drummer Tiziana Cotella to spread about the emerging act and their goals.

Dead Rhetoric: Could you talk about the early days of the band?

Matteo “Vevo” Venzano: Well, at the beginning it was really hard to carry on a serious project, because Enrico and I didn’t find the right people for the project and we had to change a lot. After the entrance of Andy Cappellari and Chiara Manese in the line-up, we’ve immediately started to write last songs and work on the material we’ve already had in order to release the first album as soon as possible, and the input of Andy was really important to achieve this result quickly.

Dead Rhetoric: There’s been some line-up changes within the band over the last few years, including a recent drummer change. Do you feel you’ve found a stable line-up at this point?

Venzano: Yes, you’re right, we’ve changed a lot over these years, but now I can tell that we found a great and serious line-up, I feel I can believe in these guys, we are going together in the same direction.

Dead Rhetoric: How would you describe the sound of Kantica to someone who had not heard the music?

Tiziana “Titti” Cotella: I start telling you that we are trying to mix every influences that every member brings. I think we created a powerful sound with guitars, drum and bass, that matches with the epic atmosphere created by Enrico with keyboards. If I have to choose some bands in order to help people to understand what we mean, I can tell Nightwish and Epica for sure, but a big influence has been growing and it comes from Japanese symphonic metal bands like Versailles and Matenrou Opera. We also get some influence from Avantasia (in songs like Albatross for example) and classical composers like Dvořák, Tchaikovsky, Mahler, etc.

Dead Rhetoric: How did the band become signed to Revalve Records?

Cotella: When we were searching for a label to promote our Reborn in Aesthetics album, we received many different proposals, and after an accurate analysis we thought that Revalve Records could be the perfect choice.

Dead Rhetoric: Is there anything behind the title, Reborn in Aesthetics?

Venzano: The title recalls the literary movement of aestheticism, seen as love for beauty and aesthetics, cause this is an aspect that has always been with us, and melodies must always result beautiful, and not only powerful, following the look that we bring on stage.

Dead Rhetoric: Being that Reborn in Aesthetics is your debut, do you feel that it measured up to what you had hoped it would be?

Cotella: Yes, we are really proud of this work, we think it represents our ideas very well. But we are artists, so our style and sound are still evolving and so we will see the results in the new songs.

Dead Rhetoric: Given the timeframe for the album’s release, have you started working on any new material?

Venzano: Yeah for sure, because we think that when you have new ideas, is the right time to work on these and create new songs. And as I told before, you will listen something slightly different from this album.

Dead Rhetoric: Would you like to try anything differently next time around, based on what you felt worked on Reborn in Aesthetics?

Venzano: Yes, firstly cause when Andy entered the band, he brought his ideas, but some songs had already been written. Now for the new songs, we can start to work on these since the beginning with the complete line-up.

Dead Rhetoric: What do you feel separates Kantica from other progressive/symphonic bands?

Cotella: I think that our sound was born by the mix of every influence that every single member brought to the band. And everyone in the band has their own musical tastes, so it’s difficult to obtain a standard symphonic sound.

Dead Rhetoric: What’s the most important element for a band playing this type of music?

Cotella: I think that if you wanna play symphonic metal, you can’t base only on keyboards and female standard voice, cause you could result boring. So we tried to bring more power and aggressive sound to the songs, but for sure, orchestral sound I can say that is a must in this kind of music.

Dead Rhetoric: Talk about the figure within your logo for the “T” in the band. Is it important for a new band to have a visual that lures in potential fans?

Venzano: Yes I think that the visual aspect is crucial, cause the logo, the artwork of the album and the atmosphere and look you have live, it helps the band to create his personality and help fans to fix something in mind.

The “T” in the logo was only a particular way to represent it, a nice idea to characterize the logo.

Dead Rhetoric: How involved has the band been getting live shows? What’s a Kantica live performance look like?

Cotella: In live shows we try to bring the aesthetics that we searched with the title Reborn in Aesthetics firstly with the look and clothing. Then we try to broadcast more power and epic feelings to the fans with our music and adrenaline on stage.

Dead Rhetoric: What will Kantica be up to as we head towards the summer months of 2018?

Cotella: For now I can tell that we are searching as many live shows as we can in order to spread our music to the fans. But finally our plan is to play some shows with big bands, and we are working with our label, Revalve Records, to achieve it. 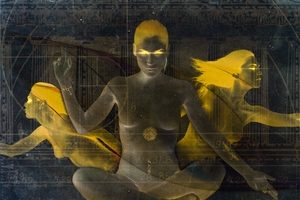