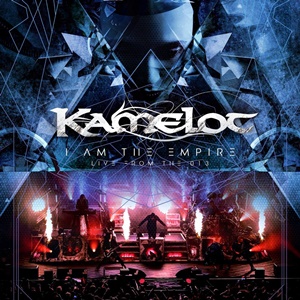 Always aiming to set the standard for audio/visual representation of their style, Kamelot delivers another live album package in this DVD/Blu-Ray/audio CD format from the fall of 2018 on tour in the Netherlands. Many will probably remember the stunning One Cold Winter’s Night DVD from 2006 at the peak of Roy Khan’s work from Norway – well now is the time to spotlight his replacement Tommy Karevik for his singing, showcasing a healthy selection of material from his three studio albums with the band. Featuring many guest spots that have been associated either in studio or on stage for their work like Alissa White-Gluz (Arch Enemy), Charlotte Wessels (Delain), Elize Ryd (Amaranthe), and Lauren Hart (Once Human) – it’s a full-on headlining experience documenting the strength, power, and dynamic diversity of this melodic, power/progressive metal outfit.

An enthusiastic crowd joins along in all the right spots with rapturous applause, unison clapping, and singalong symbiosis for deeper connection to the material on display. Overhead angles, behind the musician shots as well as key audience moments bring Kamelot closer into your world – beyond the fantastic light show and pyrotechnic movements that abound song to song. The setlist as expected favors The Shadow Theory with four tracks including “Phantom Divine (Shadow Empire)” and “Burns to Embrace” featuring the children’s choir, and six Haven songs including “Insomnia” and “Veil of Elysium” – but there are the occasional Khan-favorites like “March of Mephisto” and “Forever” that ignite the masses. Naturally Kamelot have evolved and changed a bit over the years – focused and confident in their abilities to balance out the metal and cinematic/orchestration scope of their songs – but you can’t deny their ascent up the ranks especially at a time when melodic power metal was not the ‘chosen/trendy’ flavor of the month. The pogo jumping encouragement during “The Great Pandemonium” may have been best left to more of a nu-metal show, but the fluid lead breaks and killer rhythms from guitarist Thomas Youngblood more than make up for this. You’ll also get an entertaining keyboard/drum instrumental performance that is progressive, jazzy, and neoclassical in nature.

I Am the Empire – Live from the 013 showcases the current Kamelot lineup in fine form, proving why they are steady headliners and worth the price of admission when they perform on tour or in festival situations.