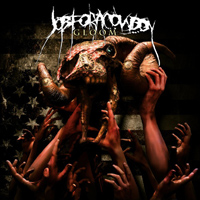 Once the poster boys for “Myspace death metal,” Job For A Cowboy have managed to survive a swell of scene policing, deathcore, and lineup changes since their 2003 inception. And while they’re not the buzz-worthy band they were four years ago, they’re becoming increasingly more formidable, as evidenced by the 4-song Gloom EP, which at long last sees the Arizona troupe find some semblance of balance and cohesion in their oft-jumbled, but no less extreme sound.

The addition of lead guitarist Tony Sannicandro pays instant dividends, giving the band a much-needed degree of melody and pizzazz. Sannicandro’s leads instantly jump out amidst JFAC’s traditional riff-tactics on opener “Misery Reformatory,” as well as on “Execution Parade.” Elsewhere, drummer Jon “Don’t call me Charn” Rice (who has the good fortune of being related to yours truly, by the way) pulls from his expanding bag of tricks during the opening portions of “Plastic Idols,” while giving “Signature of Starving Power” a healthy dosage of blasts and double-bass frenzy.

Now faced with a scene currently enamored with the likes of Whitechapel and Born of Osiris, the real litmus test for JFAC is if they can gracefully make the transition into becoming a veteran death metal band. It’s not an easy thing to do, and it’s something the aforementioned bands will no doubt struggle with. Job For A Cowboy, however, have gotten a jump-start on things with the Gloom EP, which puts them in good shape for their third full-length.

FYI: No extra points were awarded to this review because Jon loves my mom’s chicken and dumplings.