Can’t say that in the years proceeding, Job For A Cowboy ever caught much attention from yours truly. Since their signing with Metal Blade back in 2006, the band’s brand of deathcore seemed to be just hitting the right marks at the right time. Unlike their peers though, Job For A Cowboy hasn’t stuck with the deathcore doldrums, instead deciding early on to shift more towards traditional death metal. It’s been a sneaky evolution for the most part, until now. Sun Eater is destined to turn some heads, including DR’s.

Beginning the album with a proggy, methodical 2-part opener that never really sees the band going full-tilt is a risky gamble, but Job For A Cowboy really embrace their pathway and impress from the get-go. Gone are any and all traces of their deathcore past, replaced by lurching atmospherics and astonishing basslines. It’s not until “The Stone Cross” that the band rewards listeners with some well-balanced and speedier tempos, including some melodic tremolo riffing at the end. You’ll find some real knockout solos (see “A Global Shift”) and catchy melodic leads (see “Buried Monuments”) as well, a testament to the band’s songwriting maturity. The level of restraint the band displays is flat-out impressive. There was clearly a lot of work put into fleshing out each track, giving it some time to brood and build tension before occasionally pulling out the stops for a few moments for cathartic release, as the pummeling riff that culminates “The Celestial Antidote” demonstrates. More bands need to realize that song dynamic keeps things interesting over a 45-minute runtime and there’s more to tempo than just “fast.”

Job For A Cowboy has risen above all expectations with Sun Eater. A moody, prog-driven piece of death metal, this is a band making a statement. Being playfully inventive with their influences is key as well; this isn’t a case of a veteran band deciding to change gears to grab new fans or monetary gain. This is Job For A Cowboy realizing their full potential. Who knows where they could go from here! 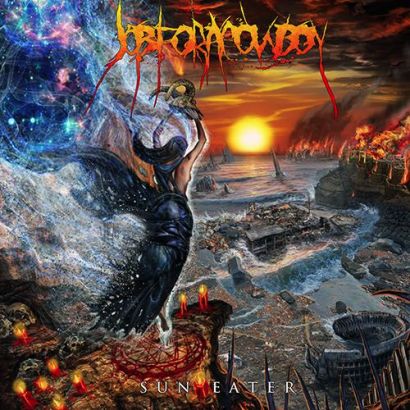