What is the breaking point at which something becomes too brutal for it’s own good?  While there are some out there muttering “blasphemy” under their breath right now, the truth is that when the only adjective to describe a band is simply “brutal,” maybe it is time to add a smidge of variety into the mix.

Don’t read this the wrong way; if unbridled brutality is your thing, your head will explode with excitement when you hear Pathogenesis.  A top-notch production gives it just enough bottom end to put a dent into concrete without feeling too over the top.  The guitars pile on devastating riff after devastating riff while the drums pound away like there is no tomorrow. But the crowning achievement in brutality is the vocals.  Completely slurred together slabs of some of the most undecipherable gurgles this side of the river Styx.  They reverberate lower than the bathtub drain!

The problem will ultimately lie with your own threshold for diversity.  Had this been a 15-minute EP, the score would probably be much higher than you see here.  But over the course of attempting to sustain the unflinching brutality for 35 minutes, it just tends to blur things together.  Without the pauses, it would be hard to tell when one track ends and another begins, outside of the closing track, “Exponential Growth,” which features an acoustic intro as well as a melodic solo before ending with eerie, sci-fi sound effects  (perhaps the song title is a hint about the music itself).

Fans of brutal death metal a la Disgorge and Devourment will eat this one up for sure, but outside of that rabid devotee-ism, file this one away under the ‘needs a bit more cooking time’ category.  While as a one-man band, this aspect is impressive; but if Infecting the Swarm show some more ‘exponential growth’ with the next album, it could be some real must-hear death metal. 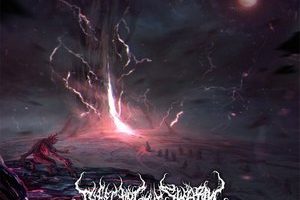