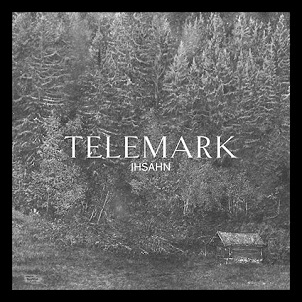 Ihsahn still gets pelted with questions — 19 years and seven solo albums after the fact — of a possible new Emperor studio album. The man is so calm and understanding about the whole thing; it’s like he expects such questions and has a parry ready well in advance. His “parry” is that had Emperor stayed together and kept releasing new music, they would sound like his solo band. And what his solo band sounds like certainly isn’t black metal. His deep-space explorations have been must-listening experiences, particularly his last two efforts, 2016’s Arktis. and 2018’s Àmr. His first EP, Telemark, will only further differentiate what has been a highly-adventurous solo journey.

Featuring three new songs and two covers, Telemark runs the gamut of the man’s musical sphere. The opening “Stridig” unleashes a torrent of buzzing black metal guitars that work their way back to his formative years. “Nord” — which is sung entirely in his native tongue — pulsates with dissonant chord choices and frothy vocals and conversely, melodic clean vocals, something Ihsahn has grown more comfortable with on each release. The title track is kinetic, bounding all over the place with blasts from long-time session drummer Tobias Ørnes Andersen (ex-Leprous) and, most notably, guest saxophone work from The Shining’s Jørgen Munkeby.

Ishahn’s cover of Lenny Kravitz’s “Rock and Roll is Dead” is both unexpected and a delight, especially hearing his acid-soaked vocals have a go with a particularly diabolical swagger. A cover of Iron Maiden’s classic “Wrathchild” closes out the EP, a faster-than-the-original acknowledgment of NWOBHM’s unswayed influence.

A worthy detour and segue between studio albums, Telemark reaffirms the almost universal belief that Ihshan’s is black metal’s greatest chameleon. Where he goes after Telemark is anyone’s guess. He probably doesn’t even know.