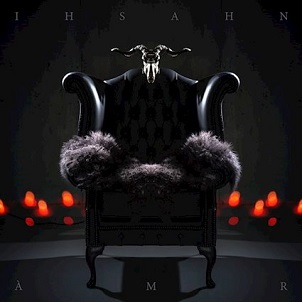 In a way, it’s both weird and reassuring that Ihsahn is only in his early 40s. Weird, since his Emperor career is now more than two decades old, the band 16 years from their deactivation, recent live reunion shows notwithstanding. Reassuring, because the man still sounds vital and perhaps best of all, young, routinely challenging himself, as evidenced by the variety in his seven solo studio albums, now including in the invasive, perplexing Àmr, which he dubs as an “inside record.”

Dominated by analog synths (they are unrelenting, even), Àmr’s intended “inside” vibe amounts to be something rather urban and desolate, the drums up front and the man’s riffs usually torpedoing one another, or, just being torpedoed by the synths themselves. And so, the frantic, blasting opener “Lend Me the Eyes of the Millenia” (drums on the album are handled by former Leprous sticksman Tobias Ørnes Andersen) represents yet another new frontier of aural exploration. The subsequent “Arcana Imperii” is sprawling and subterranean at once, with Opeth lead guitarist Fredrik Åkesson showing up for a solo.

From there, Ihsahn continues to forge disparate paths, whether on the sauntering “Sámr,” chamber-like “Where You Are Lost and I Belong” (easily one of the man’s most haunting pieces to date) and the gliding, almost smooth “Marble Soul” and “Twin Black Angels” finding Ihsahn almost effortlessly dropping in his clean vocals, an aspect of his sound that has developed significantly over time.

Little, if anything Ihsahn releases should surprise anyone, although Àmr offers its fair share of decisive left-hand turns and deviations, proving that out of anyone from the classic black metal scene, Ihsahn is the ultimate chameleon and, artist.