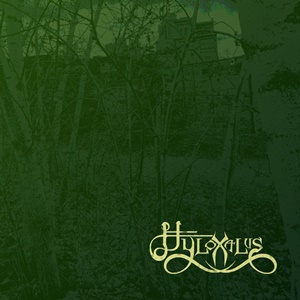 Hailing from Edmonton, Canada, Hyloxalus consists of a duo of musicians with previous work in a variety of technical death, melodic death, power and blackened outfits under their belts. Starting in 2017, they’ve released a self-titled demo in 2019 and now issue the four song EP follow up for Aposematic – developing a sound that inherently comes from a symphonic power metal base yet incorporates those heavier/extreme nuances to separate themselves a bit from the pack. Mike Bell handles the bulk of instrumentation as guitars, bass, and keyboards/programming fall under his domain – session drummer Danial Devost appearing as well, while vocalist Nina Laderoute handles the clean/operatic melodies as Mike supplements his growls when called for.

Executing three originals plus a Black Mirrors cover, Hyloxalus allows the listener to experience a wide array of textures through the development of this material. There’s a tribal segmentation in the drumming and growl/ethereal melodies right away on the opener “Voices from the Septic Hollow” – the guitars chiming in at a steady, rhythmic clip as the tension, atmosphere, and push/pull elements build over the course of the four-minute arrangement. Folk/Viking and blackened-oriented movements crop up during “10,000 Neolithic Ghosts” – somber riffing and larger grooves giving off a bit of Scandinavian charm against the Great White North heritage these musicians call home. The operatic nature of Nina’s delivery seems effortless – she injects the right phrasing and sweeping emotional resonance necessary, even mesmerizing in a calmer/alternative manner for the electronica-style closer “Moonstone”, taking this alternative rock track into their own through swirling keyboard additives. Mike as a musician and composer has the right talent, drive, and sensibilities to create memorable, exciting songs – even when he goes for a more standard symphonic, speedy power metal driving effort like “Steel, Blood and Irony” that should make Stratovarius/Sonata Arctica mavens bounce in spirited glee.

Dark power metal is an accurate description here – chock full of strong hooks, solid playing, and tracks that captivate those into a mix of North American and European influences. Hyloxalus has a bright future ahead of them based on this EP.