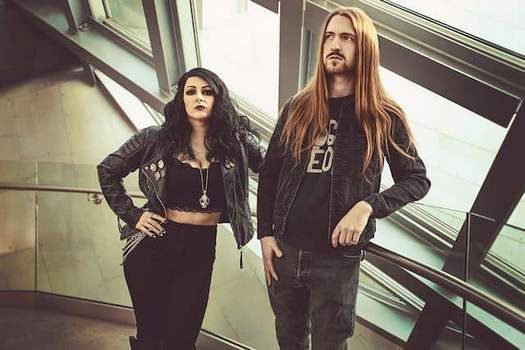 Always looking to expose readers to new bands, Edmonton, Canada is home to this intriguing power metal outfit Hyloxalus. Composing and delivering material that has diversity song to song, you will hear everything from operatic vocals to male growls, plus nuances of folk, Viking, and black/extreme metal beyond the normal symphonic, power, and darker textures. Their latest EP Aposematic has a spirit and presence that encompasses a global host of influences.

We reached out to Mike Bell – the main instrumentalist and songwriter for the duo, as he handles guitars, bass, keyboards and programming for the band. He brought us up to speed on the formation of the group, their discography, key albums that shaped his views on the metal genre, thoughts on the local Edmonton metal scene, plus the numerous other bands/projects the members of Hyloxalus are involved with and what we can expect on the next full-length outing.

Dead Rhetoric: What are some of your earliest memories surrounding music during childhood? And how did you make the progression into heavy metal music and then picking up instruments to form/perform in bands?

Mike Bell: The first music I remember obsessing over was Weird Al, as well as the City Escape music from Sonic Adventure 2. When I was in the fifth grade there was this kid in class who came into class with a guitar one day. I noticed he was popular and had lots of friends. I figured if I got a guitar that I, too, would become popular and get lots of friends. I got my dad to buy me a red Strat and enroll me in lessons. I got bored when I realized you had to actually practice guitar in order to play it. Two years later I saw Angus Young on TV and that’s when the practice bug bit me for real.

I got into metal when I heard Metallica at 16. I worked in a kitchen at the time with some metalheads so they showed me more bands, key ones being Ninjaspy, Behemoth and Nightwish. Moved out to go to music school a year after high school. When I was done that I promptly forgot all the information they taught there and started playing in heavy metal bands.

Dead Rhetoric: Hyloxalus started in 2017 – tell us about the formation of this band, and did you know straight away the style of dark power metal you wanted to develop or did things develop organically over time?

Bell: This came about because of an old demo I had for my old band Storm Horizon that we never used. They were a laid back melodeth band (mellow death?). I adapted it for a clean singer, and this became our song “Frozen Rampart”. Once I had written enough songs, I asked Nina to sing on them and luckily, she agreed. I was really happy, she is a great vocalist. We took our time with the first release because I was busy with other projects and wasn’t sure how invested I would be in this project.

Aposematic we recorded mostly in 2020, and I intended for it to be finished the same year, but COVID got so bad where we live that I didn’t want Nina and I in the same room for safety reasons. This pushed it to 2021. I’ve found myself more invested in Hyloxalus especially this year, so hopefully we can get some traction.

Dead Rhetoric: Your first self-titled demo came out in late 2019 – what are your memories surrounding the songwriting, recording, and development of this material? How would you say the reception has been to this initial offering?

Bell: The biggest thing I remember from the writing was scrapping two songs completely and rewriting that “Endless Sightless” song like six times. I also had not written much for a vocalist before, so that was a big, big learning curve.

The reception to the 2019 demo (or EP? The line is so blurry these days) wasn’t much because we didn’t promote it super hard but one thing I thought was awesome was that Judicator’s former guitarist/songwriter Alicia bought it and really dug it, which was super encouraging to me because Judicator is a band I really like and respect (go listen to her current band Project Roenwolfe, BTW!).

Dead Rhetoric: Aposematic is the latest Hyloxalus EP – where do you see the major differences in this latest set of songs versus the previous material?

Bell: Biggest thing is that, aside from the song “Steel, Blood and Irony”, Aposematic is way moodier than the 2019 demo EP, which aspired to a more upbeat power/prog kind of sound.

Dead Rhetoric: How did the idea come about to record the Black Mirrors cover for “Moonstone”? I definitely enjoyed the swirling keyboard segment that you add to the track to make this more your own…

Bell: My original idea was to cover “Destroy Everything You Touch” by Ladytron, but we demoed it and couldn’t get it to work all that well so Nina suggested “Moonstone” to me. This was a good idea, she recorded the vocal quite easily. Her performance is amazing in my opinion. The electronic stuff I did mainly because I still kinda had the Ladytron song on the brain, so that’s where my mind went.

Dead Rhetoric: How important has it been to inject the songwriting with diverse influences – as you have a dark power metal base, but add in everything from black to folk/Viking and alternative elements beyond to keep the songs fresh and dynamic?

Bell: I never really thought like “Add ____ influence to our sound” so much as “I am going to rip off ___ band this week”. For example, I started writing “10,000 Neolithic Ghosts” after listening to To the Nameless Dead by Primordial, which probably explains all the strummy black metal influence. And “Steel, Blood and Irony” is heavily inspired by Blut Im Auge by Equilibrium.

It is important to keep things fresh, especially when you have an operatic vocal sound. Like, I love Nightwish, but I feel like there must be more one can do with the ‘operatic vocals plus heavy metal’ formula than symphonic fantasy power metal. Some of the reviews we’ve gotten have been encouraging in that regard (I had one guy say to me we sounded like 80s goth which was out of left field!)

Dead Rhetoric: Do you have a preference for the studio versus the stage when it comes to your work as a musician? And how would you describe the Edmonton metal scene as far as clubs, bands, promoters, fans, etc. – do you believe things have always been strong there or do cities like Toronto, Montreal, and Vancouver gain more support?

Bell: I like playing live better. There are people to cheer, and after there’s beer. Studio is fun and important but gets grating after the millionth take.

Edmonton has, since I’ve been living here, been consistently pretty good. Before the pandemic, I noticed local show attendance had been increasing as well as the quality of bands which made me really happy. Most metal people here are nice to each other I think. While I’m on the topic of our scene, I want to give a shoutout to Eye of Horus, who in my opinion are one of Edmonton’s top five metal bands ever.

Hard for me to compare to Vancouver and Montreal, I haven’t been to these places much. I know some people in Vancouver and it seems like their scene has about the same support as ours? Hard to say.

Dead Rhetoric: What do you consider some of the biggest challenges Hyloxalus currently faces in establishing yourselves not only locally, but on a national or international scale?

Bell: Haven’t played live yet (SOON, though! A live lineup has been found, and shows will happen). Also I think we need a full length and a video if we want to get a name in other places around the world.

Dead Rhetoric: Can you name three albums that have had the biggest impact or shaped your viewpoints on heavy metal as a genre, and what would be some of your favorite show memories over the years that you’ve attended, purely as a music fan – and what made these shows/festivals so special?

Bell: There are lots but off the top of my head…

Nightwish – Once
This record led to me getting into power metal later. I didn’t want to mention it because it may be cliche, but I would be lying if I said this was not an extremely formative record for my taste in heavy metal. I used to work nights in a restaurant, and many nights after I got home at like 2am I’d listen to this and watch the End of an Era show on YouTube.

Strapping Young Lad – City
College was not a good time for me mentally which may explain why this album hit me so hard then. To this day, no musical experience has kicked my ass quite like the first time I listened to “All Hail the New Flesh”. Not even the time I literally got trampled in a Megadeth pit.

Swashbuckle – Crewed by the Damned
This record more than any other one takes me back to my teen years because Swashbuckle was the first metal band I had ever seen live. I bought the CD after their gig and listened to it lots. Swashbuckle gets written off by many people, but I think they have a quirky take on thrash metal even without the pirate outfits. Super fun band.

My best show memory would have to be seeing Blind Guardian. Their shows are a unique kind of magic. No crowd like a Guardian crowd! Seeing them play “The Bard’s Song” and being part of the legendary singalong is an otherworldly experience.

Dead Rhetoric: What types of hobbies and interests do you have away from music when you have the free time and energy to pursue them? And how do you handle the balance between work, music, and family/relationships – do you have the support of family, friends, etc. when it comes to your music endeavors?

Bell: I like running and I watch too much Star Trek. Way too much Star Trek. Good lord I love Star Trek. Family/friends are supportive. Work is easy to balance at this point, seeing as I don’t tour much. I spend most of my time outside work either doing music or spending time with my partner. Just living the life, man.

Dead Rhetoric: What worries you most about the world that we live in today, especially coming out of the global pandemic? Where do you think the average person needs to put more time, energy, and effort into to make the world a better place overall?

Bell: Climate change and ultra-billionaires scare the crap out of me. We really have to get those two things under control. Also, right-wing media is a plague.

Dead Rhetoric: What’s next on the horizon for Hyloxalus to support the EP – has work begun on the follow up effort, and if so what can people expect for the next record? Are there other projects/bands that the members of Hyloxalus are involved with that you would also like to tell us about?

Bell: I’m well into writing a full-length and all I have to say is: it gets weirder.

And yeah, we’re involved in lots of stuff! I play guitar in the bands Solborn, Spruce Moose, Revelry and bass in a techy prog band called Skepsis. Nina sings in a band called KVK’s Scarlet Haze and writes her own stuff under the name Lady Datura. Danial, our drummer accomplice, plays with me in Solborn and Revelry as well as a band called Phantom Divine. Please go give these projects a spin.

I’ll end with this: go buy our EP on Bandcamp or stream it! 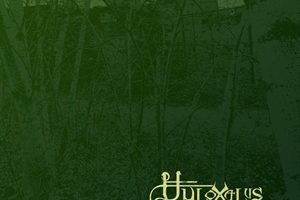