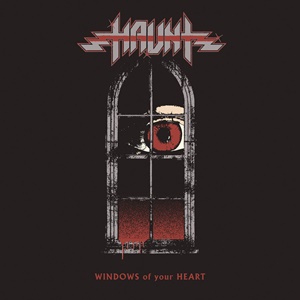 When a musician sets a lofty goal like releasing twenty albums within the same framework as Trevor William Church has for Haunt, it’s evident he’s well on his way as Windows of Your Heart is the seventh full-length in five years. Granted the pandemic allowed the band to get three albums done in 2020 alone, but you have to admire the tenacious nature and passion this California act pouring out of their material. Once again listeners should love the energetic riffs, infectious hooks, and mesmerizing appreciation for classic heavy metal with arena rock and West Coast good time vibes.

Storming out of the gates in resplendent metallic glory with the double kick, high octane opener “Mercenaries”, the mid-tempo anthem follow-up “Running Hard” sits in that alluring comfort zone – mixing up guitar and vocal harmonies in a 70’s/80’s montage, subtle keyboard parts adding extra textured flavor to an already delightful main arrangement – the instrumental transitional movement Maiden-esque with killer pinch harmonics, bends, and hero-ish breaks. It’s the little details where this record stands out from the pack – a four/four snare/kick combination that’s playing behind the guitars, soothing background vocal harmonies, occasional dance/disco-like tempos, or 80’s synth-wave splashes, taking songs like “Dream On It” and “Barricade” to another level of connection. The guitar harmonies lead the Haunt sound – Trevor’s vocals even more Ozzy-like even with his high pitched, airy delivery. There’s just something special about an artist who grabs the right hook, fleshes it out with the proper atmosphere and context while conveying reality-based lyrics, in the end creating a sound that while classic and old school at heart isn’t like other younger artists who cut and paste their favorite catalog favorites to try and pass off as their own.

One of the longer Haunt records at forty-one minutes, Windows of Your Heart continues the band’s ascension up the ranks, when those who first knew the band can still appreciate the product, but also start gaining a bit more of the fringe/mainstream interest.