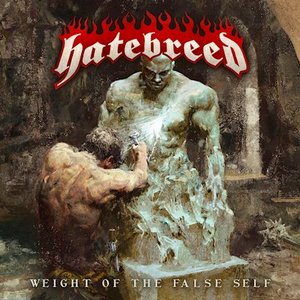 Not much of an introduction needed for a band like Hatebreed. Practically synonymous with hardcore due to their presence in the scene for over 20 years at this point, not to mention vocalist Jamey Jasta’s work done for the metal scene. So with the band’s eighth release in Weight of the False Self, don’t expect too many major shake-ups from the band’s aggressive and pissed off sound. But some of the metallic injections do feel more notable.

It doesn’t even take a second for “Instinctive (Slaughterlust)” to kick into full gear with angry shouts and chugging riffs that are bound to incite fans into a live frenzy. Headbangable and circle-pit friendly riffs imbue the track with a violent energy that the band has been conjuring since the beginning. The songs are direct and to the point – there’s no need to be flashy or pretentious, and “Let Them All Rot” continues with the same urgent tones of the opener, with plenty of call and response vocals and pummeling riffs, with Jasta’s commanding charisma giving the band a dominating presence. Of course, a vicious breakdown comes in before the end, though an even bigger one awaits with the title track. What makes Weight of the False Self somewhat stronger though, is that the band doesn’t just go for the throat. “Cling to Life” has a more metallic base to it, with some rather melodic guitar lines in the chorus that really stand out. Not to mention the lead later in the track – it serves as a nice change of pace from the unbridled aggression of some of the other tracks. “Dig Your Way Out” also has an almost thrashy vibe to it, which transforms it into quite the barnburner of a track with a stronger emphasis on speed. “Wings of the Vulture” also has a groovier feel to it as well, sprouting a more metallic abrasion to it while still keeping an immediate and punchy vibe.

You know what you are walking into with a Hatebreed release, but that doesn’t make it any less devastating. If anything, their more recent dabbling with greater metallic elements makes that musical punch in the face even stronger. Hatebreed continue to champion their sound while making some slight tweaks to the formula, and Weight of the False Self is an even more pissed off and empowering record because of it.