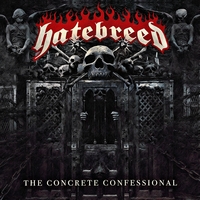 Hard to think of the term ‘hardcore’ without Hatebreed being one of the first names that come to mind. Being one of the more adept at crossing the hardcore ethos with some metallic injections from time to time, Hatebreed have long been a benchmark of the scene. Their seventh album (and first for Nuclear Blast), The Concrete Confessional does little to change that status.

It takes all but 2 seconds to hear how pissed Hatebreed remain after all these years as they fire away into the opening of the barnburner that is “A.D.” If nothing else, it seems that the band’s thrashy/Slayer-esque riffs chew even more of the scenery and keep the mostly 3-minutes or less songs punchy and to the point. Plenty of anger and intensity abound as the first few tracks that follow “A.D.” follow in this same level of abrasion. The rest of the album doesn’t really relent, with “Something’s Off” being the only exception, opening with some rumbling bass before moving into somewhat melodic territory (including cleaner vocals) and working with mostly groove for the length of the song. Bludgeoning thrash riffs and plenty of groove provide vocalist Jamey Jasta with fodder for the usual Hatebreed topics – just as seething with rage (and positivity) as they always have been. Some highlights include the fist-pumping action of “Us Against Us,” bouncing groove of closer “Serve Your Masters,” and solid gang-vocal “oohs” of “The Apex Within.”

While it doesn’t exactly break any new ground, The Concrete Confessional is a great reminder of what a force Hatebreed is within the scene. Sure to appeal to the fanbase, this is Hatebreed doing what they’ve always done best. No frills, metallic hardcore at it’s finest.