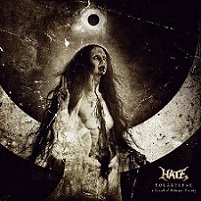 A side-Behemoth proposition, Poland’s Hate may suffer from a partial identity crisis, yet there’s no mistaking for their randy death/black metal assault. Solarflesh is the band’s eighth offering, the follow-up to 2010’s well-received Erebos, an album that enabled the Poles to hit North America for the first time in their 20 years-plus existence. Solarflesh ties things in on a similar fashion; limited by its scope, but burly enough to smash a few skulls, for lack of a better term.

One can instantly envision some serious helicopter headbanging taking place once “Eternal Might” gets in motion. The riffs smolder effortlessly, while the cadence of main dude Adam the First Sinner gives not-so-subtle nods to his counterpart, Nergal. It’s all in creating the sort of grandiose, without being symphonic aura, and it’s where the stretched-out song structures of “Sadness Will Last Forever” and the title track come to the fore. Let’s not forget the crisp melodies packed on at the end of “Alchemy of Blood,” making it the album’s sure-fire highlight.

Comparisons to their much bigger contemporaries in Behemoth aside, Hate have created an all-encompassing, brutality-first, speak-later offering with Solarflesh. No one will question the album’s potency, that’s for sure. Just don’t let it ride along with Nergal and crew.