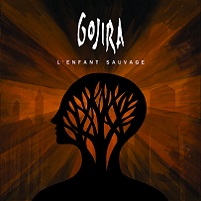 Much higher stakes for France’s Gojira now that they’ve gotten the call-up to the big leagues with Roadrunner. They can’t really sneak up on people like they did with 2005’s brilliant From Mars to Sirius, and they can’t position themselves for a semi-flop ala 2008’s The Way of All Flesh. Rather, it’s now expected that the Frenchman deliver something on par with From Mars to Sirius, and luckily for them, all indications point to L’Enfant Sauvage (“Wild Child”) being that album. And it is.

With a more united sonic front than its predecessor, L’Enfant Sauvage sees Gojira rely almost exclusively on those tide-turning riffs, a lot of which bore their trademark Strapping Young Lad/Morbid Angel whistle along with those nifty little pick slides and dainty pinch harmonics. The counterpoint movement of the title track is top-notch, with an urgent nature and delicate picking, while “The Axe” is another mover and shaker, highlighted by a downward main riff that creates this sort of depressive feel that frankly, the band needs to do more of.

The album’s high point comes in the form of “Liquid Fire,” a song whose heaviness is on par with “The Heaviest Matter of the Universe,” only with more direct blows and bristling riff-action from Joe Duplantier and Christian Andreu. Further aiding the song’s cause are some killer robot-like vocals from Duplantier, who in his role as vocalist, remains incredibly underrated. Discernible all the while readily extreme, Duplantier’s consistent vocal jabs help Gojira straddle the extreme and modern line rather easily, as heard on the propulsive “Planned Odolescence” and restrained “Born In Winter.”

As much as we say the stakes are higher for Gojira, the fact that they’re not expected to push a mass amount of units probably played into L’Enfant Sauvage’s ten-ton hammer sound. Sure enough, it easily passes The Way of All Flesh, thus re-establishing Duplantier and co. as one of metal’s brightest beacons, able to transcend all of our silly subgenres while remaining true to their core. There is no glass ceiling with Gojira.